Unequal: A Story of America (Hardcover) 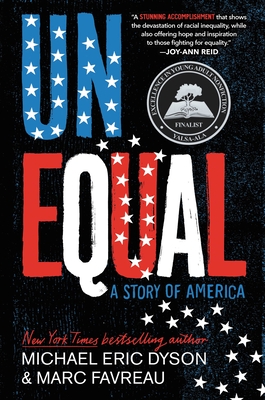 Unequal: A Story of America (Hardcover)

The true story of racial inequality—and resistance to it—is the prologue to our present. You can see it in where we live, where we go to school, where we work, in our laws, and in our leadership. Unequal presents a gripping account of the struggles that shaped America and the insidiousness of racism, and demonstrates how inequality persists. As readers meet some of the many African American people who dared to fight for a more equal future, they will also discover a framework for addressing racial injustice in their own lives.
Dr. Michael Eric Dyson is an award-winning and New York Times bestselling author of over twenty books, a widely celebrated professor, a prominent public intellectual, an ordained Baptist minister, and a noted political analyst. He is a two-time NAACP Image Award winner, and the winner of the American Book Award for Come Hell or High Water: Hurricane Katrina and the Color of Disaster. His book The Black Presidency: Barack Obama and the Politics of Race in America was a Kirkus Prize finalist. He is also a highly sought after public speaker who is known to excite both secular and sacred audiences. A native of Detroit, Michigan, he currently lives in Nashville, Tennessee. This is his first book for teens. Follow him on Twitter @michaeledyson and on his official Facebook page (facebook.com/michaelericdyson).

Marc Favreau is the acclaimed author of Crash: The Great Depression and the Fall and Rise of America and Spies: The Secret Showdown Between America and Russia, and co-editor (with Ira Berlin and Steven F. Miller) of Remembering Slavery: African Americans Talk About Their Personal Experiences of Slavery and Emancipation. Favreau is also the director of editorial projects at The New Press. He lives with his family in New York City and Martha's Vineyard, Massachusetts.
"Michael Eric Dyson is one the greatest intellectuals and thought provokers of our time. In this book he and Marc Favreau realize we are the fruit of generations of giants who labored for and demanded a more equal America. Read Unequal to learn their stories—and our own."—Common, Grammy Award-winning artist, author, actor, and activist

"With clarity and insight, Unequal illuminates how racial inequality is built into every aspect of American society. In gripping prose, Michael Eric Dyson and Marc Favreau draw clear lines between past and present struggles for racial equality to reveal what is required of us if we truly want to live in a society without racism.—Robin DiAngelo, #1 bestselling author of White Fragility: Why It’s So Hard for White People to Talk About Racism

"Michael Eric Dyson has long offered a vital perspective on race in America. Unequal is a stunning accomplishment, where Dr. Dyson and Marc Favreau transport readers across the country and across time to show the devastation and insidiousness of racial inequality, while also offering hope and inspiration to those fighting for equality."—Joy-Ann Reid, bestselling author and host of The ReidOut on MSNBC

* "Crucial…This searing look at attempts to block students 'from learning the truth of inequality in the United States' encourages readers to acknowledge the deep-seated presence of structural racism in America. A must-read and a must-teach."—Publishers Weekly, starred review

* "This accessible, riveting collection will inspire readers to claim responsibility for helping to ensure that the U.S. one day lives up to its most ethical professed ideals. Grounded in evidence and optimistic: uplifts the social power of studying Black American freedom fighters."—Kirkus Reviews, starred review

* “This is a necessary resource and will inspire students to promote social justice.” —SLC, starred review