Defying Isis: Preserving Christianity in the Place of Its Birth and in Your Own Backyard (Paperback) 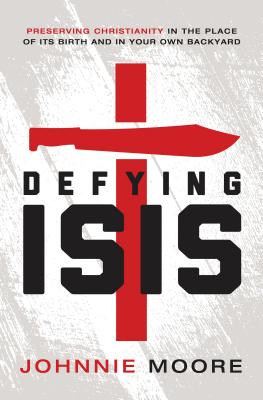 Defying Isis: Preserving Christianity in the Place of Its Birth and in Your Own Backyard (Paperback)

Has a Christian Holocaust Begun?

A Christian genocide at the hands of Islamic extremists is unfolding in the Middle East. Entire Christian populations have been eliminated, and the ultimate aim of ISIS is to eradicate the world of Christianity.

They are well on their way. Thousands of Christians arrive in refugee camps daily as tents can be seen for miles across the countryside of Jordan, N. Iraq and Lebanon.

In many cities every single Christian has been "taken care of" - displaced, murdered or forcibly converted, and just as the Nazis painted the Star of David on the homes of Jews, Jihadists have painted the Christian "N" (the first letter of the Arabic word for "Christian") on the homes of indigenous Christian communities to identify them before destroying them. They have proclaimed that they will not stop until Christianity is wiped off the earth from the land of its birth all the way to your own backyard. So what can be done to help these brave souls in the crossfire and protect a holy land?

With never before told stories of horror and of hope, Johnnie Moore unveils the threat of ISIS against worldwide Christianity, and what the world must do about it. Along the way, he introduces us to the courageous Christians who have stared down ISIS and lived to raise their crosses higher.

Johnnie Moore is an author and humanitarian whose adventures have taken him to more than two-dozen nations. He's worked with genocide victims in Bosnia and Rwanda, established a sustainable agricultural project in Zimbabwe, visited the world's largest refugee camps, and on five different occasions has worked in places that were later bombed by Islamic extremists. He is currently focused on providing immediate assistance through the Cradle Fund (www.cradlefund.org).