The Cosmos Explained: A history of the universe from its beginning to today and beyond (Hardcover) 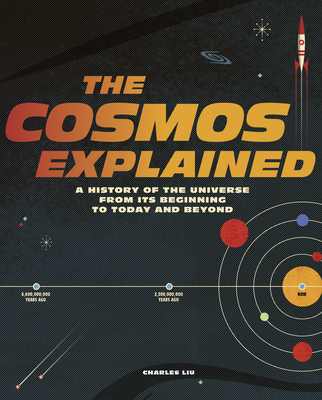 The Cosmos Explained: A history of the universe from its beginning to today and beyond (Hardcover)


Usually Arrives to Store in 1-5 Days
The Cosmos Explained is an exciting and beautifully designed book that charts the life of our universe from the Big Bang to the present day and beyond.

With deeply insightful and fascinating text by Hayden Planetarium Associate Professor Charles Liu, who also hosts the immensely popular StarTalk podcast, this book is an accessible and enthralling gateway into the mysteries of space, time, and the universe.

Pinpoint exactly where you are in space and time using the timeline at the bottom of every page, and explore the history of the cosmos and the science behind it through beautiful telescope images and striking illustrations.

Packaged in a unique retro design that reflects the 1960s cosmonaut era but still feels modern and relevant today, this title is as rich with information as it is with stunning visualisations of the concepts and bodies detailed within.

An ideal gift for anyone interested in space or curious about the cosmos, The Cosmos Explained is a unique and entertaining timeline of life, the universe, and everything!

Charles Liu is a Professor of Astrophysics at the City University of New York’s College of Staten Island, an Associate with the Hayden Planetarium, and of the department of astrophysics at the American Museum of Natural History in New York. He is a regular co-host on the famous StarTalk show, and received the 2001 American Institute of Physics Science Writing Award for his book One Universe: At Home in the Cosmos. He lives in Montclair, New Jersey.

Who would have thought learning about the evolution of the Universe could be so fun and easy to follow? It doesn’t sound possible when you’re tackling a subject as overarching as this, but Charles Liu has managed to turn complex scientific prose and mathematics into an accessible and beautifully presented retelling of its origins...

Whether you’re a budding cosmologist or simply someone with a deep fascination for the Universe and how it came to be, this book is a great introduction to the subject. ?????