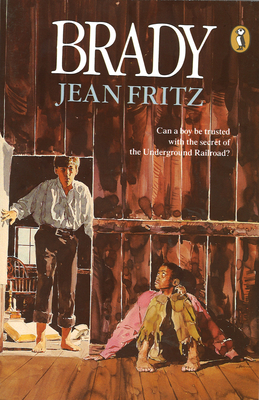 
Usually Arrives to Store in 1-5 Days
Newbery Honor-winning author, Jean Fritz, takes us on a journey to the Underground Railroad.

Brady has never been trusted with secrets, until now. When he discovers an Underground Railroad station near his family's farm, he is forced to make his own decision about the slavery controversy. Whatever his decision may be, he knows that this is one secret that must be kept.

"A perceptive, satisfying story." --Booklist"
"Mrs. Fritz has written an exciting, yet tender, chronicle of the boy, his home, and his times." --Kirkus Reviews


Acclaimed biographer, Jean Fritz, was born in China to American missionaries on November 16, 1915. Living there until she was almost thirteen sparked a lifelong interest in American history.  She wrote about her childhood in China in Homesick, My Own Story, a Newbery Honor Book and winner of the National Book Award.
Ms. Fritz was the author of forty-five books for children and young people. Many center on historical American figures, gaining her a reputation as the premier author of biographies for children and young people.
Among the other prestigious awards Ms. Fritz has garnered are: the National Humanities Medal, the Laura Ingalls Wilder Award, the May Hill Arbuthnot Lecture Award. the Christopher Award, the Boston Globe-Horn Book Non-Fiction Award, a New York Times Notable Book of the Year, and many ALA Notable Books of the Year, School Library Journal Best Books of the Year, and ALA Booklist Editors’ Choice Awards.
She passed away on May 14, 2017.
"A perceptive, satisfying story." --Booklist


"Mrs. Fritz has written an exciting, yet tender, chronicle of the boy, his home, and his times." --Kirkus Reviews