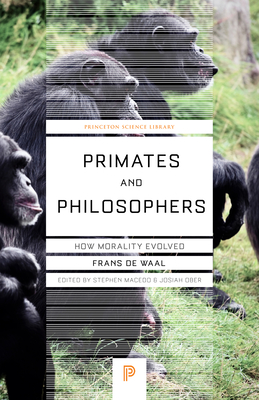 Can virtuous behavior be explained by nature, and not by human rational choice? "It's the animal in us," we often hear when we've been bad. But why not when we're good? Primates and Philosophers tackles this question by exploring the biological foundations of one of humanity's most valued traits: morality.

In this provocative book, renowned primatologist Frans de Waal argues that modern-day evolutionary biology takes far too dim a view of the natural world, emphasizing our "selfish" genes and reinforcing our habit of labeling ethical behavior as humane and the less civilized as animalistic. Seeking the origin of human morality not in evolution but in human culture, science insists that we are moral by choice, not by nature. Citing remarkable evidence based on his extensive research of primate behavior, de Waal attacks "Veneer Theory," which posits morality as a thin overlay on an otherwise nasty nature. He explains how we evolved from a long line of animals that care for the weak and build cooperation with reciprocal transactions. Drawing on Darwin, recent scientific advances, and his extensive research of primate behavior, de Waal demonstrates a strong continuity between human and animal behavior. He probes issues such as anthropomorphism and human responsibilities toward animals. His compelling account of how human morality evolved out of mammalian society will fascinate anyone who has ever wondered about the origins and reach of human goodness. Based on the Tanner Lectures de Waal delivered at Princeton University's Center for Human Values in 2004, Primates and Philosophers includes responses by the philosophers Peter Singer, Christine M. Korsgaard, and Philip Kitcher and the science writer Robert Wright. They press de Waal to clarify the differences between humans and other animals, yielding a lively debate that will fascinate all those who wonder about the origins and reach of human goodness.
Frans de Waal is the C. H. Candler Professor of Psychology at Emory University and director of the Living Links Center at the Yerkes National Primate Center in Atlanta.