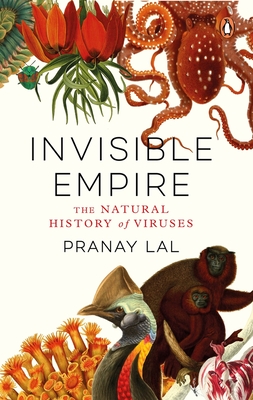 Viruses are the world's most abundant life form, and now, when humanity is in the midst of a close encounter with their immense power, perhaps the most feared. But do we understand viruses? Possibly the most enigmatic of living things, they are sometimes not considered a life form at all. Everything about them is extreme, including the reactions they evoke. However, for every truism about viruses, the opposite is also often true. So complex and diverse is the world of viruses that it merits being labelled an empire unto itself. And whether we see them as alive or dead, as life-threatening or life-affirming, there is an ineluctable beauty, even a certain elegance, in the way viruses go about their lives-or so Pranay Lal tells us in Invisible Empire: The Natural History of Viruses.

This is a book that defies categorisation. It brings together science, history and great storytelling to paint a fascinating picture of viruses as a major actor, not just in human civilisation but also in the human body. With rare photographs, paintings, illustrations and anecdotes, it is a magnificent and an extremely relevant book for our times, when we are attempting to understand viruses and examining their role in the lives of humans.

Pranay Lal is a biochemist who works in the spheres of public health and environment. His first book Indica: A Deep Natural History of the Indian Subcontinent won the 2017 Tata Lit Prize, the World Book Fair Award, among others, and was named by Mint Lounge as one of the fifty must-read books about India since Independence. You can reach him at invisible.empire@tutanota.com.