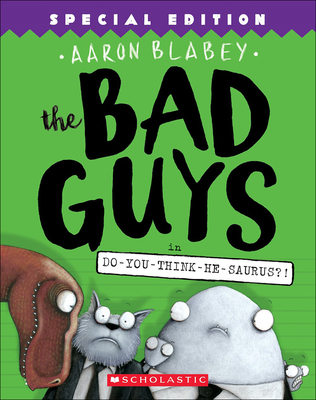 This is book number 7 in the Bad Guys series.

The Bad Guys have flown through outer space, made it back to Earth, and managed to land in exactly the right place... but exactly the wrong TIME. Who knew alien escape pods were capable of time travel? ? And now that they're 65 million years in the past, they must avoid being eaten by dinosaurs and fix their broken time machine if they ever want to get back home before an evil alien destroys the whole world This super special edition also includes a hilarious original short story following evil Dr. Marmalade's quest for superstardom, quizzes, games, and more.
Aaron Blabey was an actor before he started creating children's books. In 2008, Pearl Barley and Charlie Parsley was awarded Children's Book Council of Australia's Book of the Year. In 2012, The Ghost of Miss Annabel Spoon was named a White Raven by the International Youth Library, Munich, Germany. It also won the Patricia Wrightson Prize in the 2013 New South Wales Premier's Literary Awards, and the Children's Peace Literature Award, 2013. And now The Bad Guys has won Australia's Children's Indie Book Award for 2016! He is also the author of many children's picture books, including the bestselling Pig the Pug series and Thelma the Unicorn. Aaron lives with his two children and his wife in Sydney, Australia.