We're Going on a Goon Hunt (Board book) 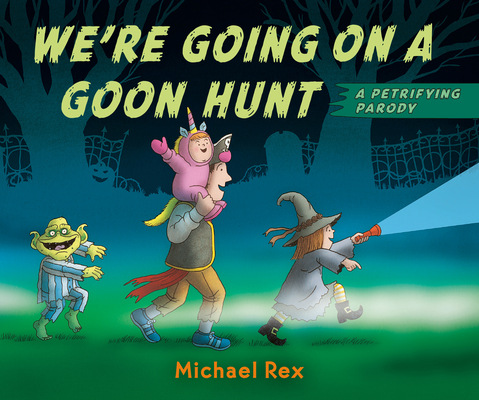 We're Going on a Goon Hunt (Board book)


On Our Shelves Now
This ghoulish parody of We’re Going on a Bear Hunt is a hilarious companion to the New York Times #1 bestseller Goodnight Goon.

A goon hunt is no easy task. A twisted tangled pumpkin patch, murky bubbling swamp, and foggy crumbling graveyard are just a few of the obstacles these kids will have to go through, skulking monsters included. And when the Goon finally makes an appearance—under the covers they go! Except one brave child who finds monsters more fun than scary.

The beloved classic We're Going on a Bear Hunt gets an eerie twist in this goon-infused parody that perfectly plays with the rhythm and sound effects of the original. Mike Rex's creepy settings and hilarious text will have kids demanding to giggle and shiver through the story again and again, and now this board book edition is perfect for toddler bedtimes and read alouds.
Michael Rex has written and illustrated over 40 books for children, including the gruesomely hysterical, #1 New York Times bestseller Goodnight Goon. His popular sword swinging Fangbone! graphic novels have been turned into an animated show that runs on Disney XD in the U.S., and many other markets worldwide. He visits schools across the country and internationally to share his books with students of all ages, and he has a master's degree in Arts Education. His work covers a wide range of styles, from the simple, goofy rhymes of Truck Duck, to the heavily illustrated, yuck-filled Icky Ricky chapter books. He lives in New Jersey with his wife, two boys, and a dog named Roxy.
"Sprinkled with lurking monsters to spot, Rex’s mixed-media pictures have a timeless feel that renders this tale much more charming than chilling." —Publishers Weekly

"Well suited for storytimes, this companion to Goodnight Goon and The Runaway Mummy lets readers look the season in its green or translucent face and laugh." —The Horn Book

"In this atmospheric 'petrifying parody' of We’re Going on a Bear Hunt, a dad and his four kids, dressed in Halloween finery and accompanied by their costumed pup, search for the elusive quarry. They become more frightened (particularly dad and pooch, even from the outset) as they proceed along the increasingly murky path—except for the youngest, unicorn-outfitted child, who squeals a delighted welcome to whatever creature unexpectedly materializes. As in the classic original, evocative sound effects (“Gurgle hiss, gurgle hiss, gurgle hiss!”) ring out as the quintet moves through each hazard. . .  Even readers who’ve never read or heard about the bear expedition will appreciate this clever, comical, fast-paced take. . . Humorously brooding and sweetly endearing." —Kirkus Reviews