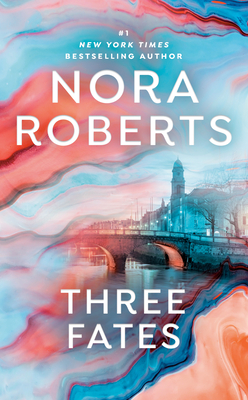 
On Our Shelves Now
From #1 New York Times bestselling author Nora Roberts comes an unforgettable tale of luck and love in which the fortunes of three siblings depend on a simple twist of fate.

When the RMS Lusitania sank in 1915, one survivor became a changed man, giving up his life as a petty thief. But the man still kept the small silver statue he lifted, saving it as a reminder of his past and a family heirloom for future generations. A century later, that priceless heirloom—one of a long-separated set of three—has been stolen again.

Malachi, Gideon, and Rebecca Sullivan are determined to recover their great-great-grandfather’s treasure, reunite the Three Fates, and make their fortune. Their quest will take them from their home in Ireland to Helsinki, Prague, and New York, where they will meet a brilliant scholar who will aid them in their hunt—and an ambitious woman who will stop at nothing to acquire the Fates....
Nora Roberts is the #1 New York Times bestselling author of more than 200 novels. She is also the author of the bestselling In Death series written under the pen name J. D. Robb. There are more than 500 million copies of her books in print.
Praise for Three Fates

“Satisfying...intriguing [and] romantic. The characters are all different and all likable. You’ll become caught up in their lives, their antics and their emotions and will miss them when they’re gone.”—The State (Columbia, SC)

“The potent mix of suspense and legend conjures a fast-paced and compelling plot.”—Bath Chronicle

“A rapid pace...[A] fascinating read. The Sullivan siblings and their significant others are a varied group that makes for lively scenes and interactions.”—BookBrowser