Donut: The Unicorn Who Wants to Fly (Hardcover) 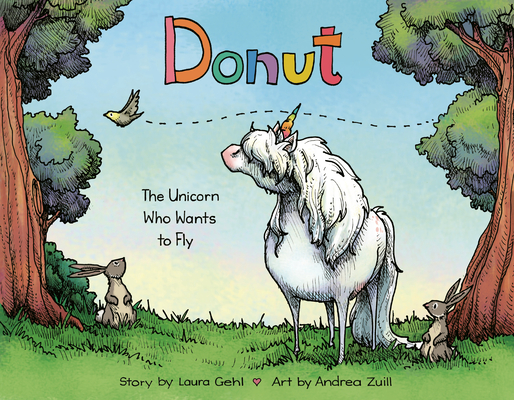 Donut: The Unicorn Who Wants to Fly (Hardcover)

“This is such a cute picture book about dreams and perseverance! The illustrations are adorable and add so much to the written story. I cannot wait to read this one to my preschoolers at story time.”
— Anna Brown, Katy Budget Books, Houston, TX

Here's the hilarious story of Donut, a scruffy unicorn who can't fly-- but who keeps on trying! From the author of One Big Pair of Underwear and the illustrator of Sweety.

When Donut, a fluffy, scruffy unicorn with a colorful horn spots a bird in the air, she thinks, why can't I be up there, too? And so she jumps! off of a log and and even a trampoline. But thump! she falls down to the ground. After many attempts at flight (including wings fashioned out of sticks), Donut schemes with the other animals in the field, and finally comes up with an ingenious and imaginative solution. Finally, her perseverance pays off-- and Donut flies!


With a simple text and expressive art, here is a character-driven story from a popular author-illustrator duo that's laugh-out-loud funny, ingenious, and sure to appeal to all those unicorn fans out there--especially those who like their unicorns a little on the imperfect side.

ANDREA ZUILL is the author-illustrator of Regina is NOT a Little Dinosaur, an Indie Next List selection; Sweety, a Booklist Best Book of the Year; and Wolf Camp, a Children’s Choice Award finalist. She is also the creator of Business Pig, Dance Is for Everyone, and Marigold & Daisy. Andrea is the illustrator of Cat Dog Dog by Nelly Buchet, an American Library Association Notable Book which was called "A clever, winning read-aloud for modern families" in a starred review from Kirkus. Her work has been exhibited in galleries in California, Texas, and New York. Visit Andrea on the Web at andreazuill.org or follow her on Twitter at @AndreaZuill.