There Is Never Anything but the Present: And Other Inspiring Words of Wisdom (Hardcover) 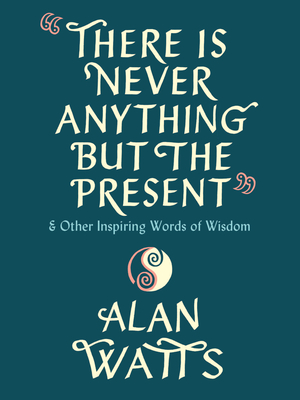 There Is Never Anything but the Present: And Other Inspiring Words of Wisdom (Hardcover)


On Our Shelves Now
A giftable collection of inspiring, uplifting, and enlightening words of wisdom from one of the most important voices in spirituality and self-help

"The perfect guide for a course correction in life." —Deepak Chopra

Here is an indispensibli treasury of uplifting and enlightening quotations for guidance, support, and spiritual sustenance. In his classic works of philosophy, Alan Watts shared timeless wisdom with readers worldwide. In this book are some of his most thought-provoking words to live by, to reflect upon, and to read for inspiration, knowledge, and growth
The philosopher ALAN WATTS (1915‒1973) is best known for popularizing Zen Buddhism in the United States and Europe. During his lifetime he wrote more than twenty-five books, including the bestsellers The Way of Zen and The Wisdom of Insecurity. Born in England, Watts immigrated to the United States in his twenties. His colorful and controversial life, from his school days in England, to his priesthood in the Anglican Church as chaplain of Northwestern University, to his experimentation with psychedelic drugs, made him an icon of the 1960s counterculture movement. Millions of followers continue to be enlightened by his teachings through his books, which have been published in twenty-six countries, and his lectures, which are found worldwide on the internet.