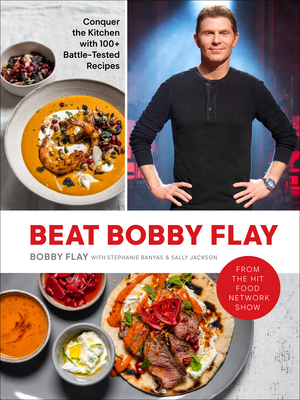 
On Our Shelves Now
Think you can cook better than Bobby Flay? Put your kitchen skills to the test and cook alongside Bobby and his competitors with more than 100 recipes from the hit show.

Beat Bobby Flay brings the excitement of the Food Network show stage into your home kitchen, with more than 100 recipes for breakfast and brunch, weeknight-worthy dinners, and stunning desserts that make every meal a winner. Bobby’s best recipes and other favorites from the show make appearances, from Seafood Fra Diavolo with Saffron Fettuccine (handmade pasta always wins the judges’ hearts) to Mushroom and Goat Cheese Chiles Rellenos (the secret: crispy Brussels sprout leaves) and Bittersweet Chocolate Soufflé. Sprinkled throughout Bobby’s recipes are behind-the-scenes stories of fan-favorite moments, tips to help you “beat the clock” when you’re pressed for time, and pro-chef suggestions for everything from meal prep to garnish (when in doubt, add anchovy breadcrumbs!).

Alongside Bobby’s favorites are a wealth of recipes from his competitors on the show who beat Bobby Flay, including Alex Guarnaschelli’s Lobster Newberg, Marcus Samuelsson’s Doro Wat (Ethiopian chicken stew), and Shelby Sieg’s Lemon-Thyme Olive Oil Cake. The ultimate companion cookbook to one of the country’s favorite Food Network shows, Beat Bobby Flay also features beautiful, all-new color food photography as well as shots from everyone’s favorite episodes. With Bobby’s expertise and tried-and-true tips helping you stay in it to win it, you’ll be ready to crush any competition that comes your way!
Bobby Flay is one of the country’s most celebrated chefs, restaurateurs, media personalities, and authors. He is a James Beard Award winner, is the author of thirteen cookbooks, and has starred in fourteen Food Network programs. In 2015, he became the first chef to be awarded a star on the Hollywood Walk of Fame.

Stephanie Banyas has coauthored eleven cookbooks with Bobby Flay. She currently lives in Bozeman, Montana, with her beloved cat, Fred.

Sally Jackson lives in New York with her children and husband, with whom she cofounded the nonprofit foundation KIF1A in 2016. This is Sally’s tenth cookbook with Bobby and Stephanie.