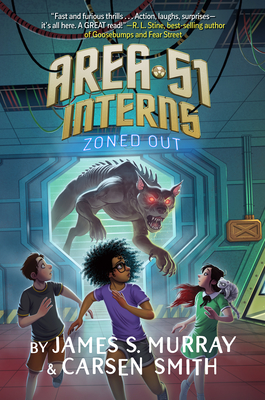 This is book number 2 in the Area 51 Interns series.

From the mind of Murr from the Impractical Jokers comes the second book in the hilarious and action-packed series about a world of bizarre creatures, wacky gadgets, and four kid interns at the most interesting place on Earth: Area 51!

After saving their parents from an alien attack and becoming official interns at Area 51, Viv Harlow and her friends Charlotte, Ray, and Elijah are ready to keep taking down bad guys and helping test all the fun high-tech gadgets. Instead, they all get put on filing duty (bo-ring!) and kept away from the real action. When Elijah discovers a secret Forbidden Zone hidden away on the base, the group jumps at the chance to explore the new place, only to learn it's home to some of the most elusive creatures on Earth. But after the Yeti, Loch Ness Monster, and more terrifying monsters escape, they'll have to prove themselves to their parents and capture the beasts to save the base!

The debut middle-grade series from Murr of the Impractical Jokers and co-author Carsen Smith, Area 51 Interns is filled with enough high-tech hijinks, strange creatures, and laugh-out-loud humor (plus an extra color insert full of gadgets) to make even cryptid skeptics hooked for more!
James S. Murray is a writer, executive producer, and actor, best known as “Murr” on the hit television show Impractical Jokers on truTV and The Misery Index on TBS. When he is not helping search for LARRY or getting thrown out of an airplane by his best friends, Murr writes novels, such as the international best-selling Awakened trilogy, Don’t Move, and The Stowaway. Originally from Staten Island, he now lives in Princeton, New Jersey, with his wife, Melyssa, and puppy, Penny. @jamessmurray. Carsen Smith wrote her first book at nine years old, but it wasn’t very good. Now, she’s a comedian, writer, and producer living in Brooklyn with her cats, Goose and Buffalo. She once worked as a zookeeper and can probably beat you at Ping-Pong.
"Tongue-in-cheek, pedal-to-the-metal action, with an unusually broad cast of humans, aliens, and…others."—Kirkus

“An idea that’s so fantastic, I wish I thought of it. An internship at Area 51 — what could go wrong? This one’s So. Much. Fun.”—Brad Meltzer, bestselling author of the Ordinary People Change the World series

“Fast and furious thrills. Just when I thought the kids had survived the terrifying dinosaurs, the REAL monsters appeared! Action, laughs, surprises – it's all here. A GREAT read!"—R.L. Stine, bestselling author Goosebumps and Fear Street