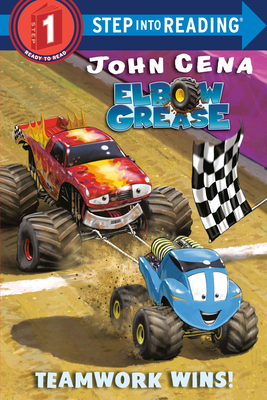 
On Our Shelves Now
It's up to Elbow Grease, the little blue monster truck who never gives up, to help his brother and his whole monster truck family in this Step 1 reader from superstar entertainer and #1 New York Times bestselling author John Cena!

Step 1 Readers feature big type and easy words for children who know the alphabet and are eager to begin reading. Rhyming and rhythmic text paired with picture clues will help young readers decode the story.
John Cena is a beloved entertainer and dedicated philanthropist. His films include Ferdinand, the Transformers spin-off Bumblebee, and Playing with Fire. Inspired by Richard Scarry--one of his favorite children's book creators--John has brought kids Elbow Grease, a story for young readers inspired by his own experiences growing up with four brothers, and one that shares his inspiring personal credo: hustle, loyalty, and respect. Visit him at wwe.com/superstars/john-cena, Instagram.com/@johncena, Facebook.com/johncena, and Twitter.com/JohnCena.

Dave Aikens is the illustrator of well over 100 books featuring characters from popular kid's TV shows such as Dora the Explorer, SpongeBob Squarepants, and The Cat and the Hat. He lives outside of Columbus, OH, with his wife, son, and dogs.