There's a Witch in Your Book (Who's In Your Book?) (Board book) 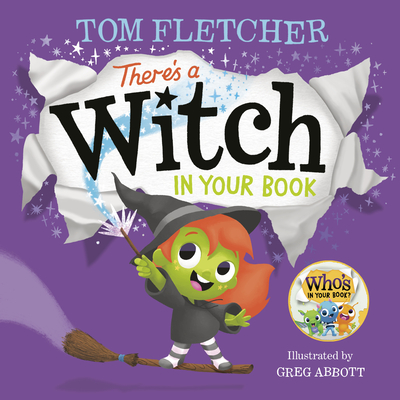 There's a Witch in Your Book (Who's In Your Book?) (Board book)


Coming Soon - Available for Pre-Order Now
Just in time for Halloween, an adorable little witch has landed in YOUR book—now in board! An engaging new adventure from the team that brought you There's a Monster in Your Book and its companions.

A grumpy little witch has thrown a magic spell at you! If you can capture it, you can use your finger wand to make magic yourself in this participatory book. But, be careful! Your bewitched finger wand might be more powerful than you think! This book shows how tidying up can be fun!

Look for every book in Tom Fletcher and Greg Abbott's Who's In Your Book? series for more read-aloud fun! INTERACTIVE ADVENTURES FOR BIG IMAGINATIONS:

Tom Fletcher is one of Britain's bestselling children's authors (in addition to being a rock star!), and his YouTube videos have been viewed tens of millions of times.
TOM FLETCHER is one of the UK's bestselling authors for children. The Christmasaurus was the biggest debut middle-grade novel of 2016, and The Creakers was a number one bestseller. Tom is also the bestselling author of the picture books There's a Monster in Your Book, There's an Elf in Your Book, and There's a Dragon in Your Book, which received a Children's Choice Honor. The Dinosaur That Pooped picture books, written with his bandmate Dougie Poynter, have sold over a million copies. With his wife, Giovanna Fletcher, Tom is the author of Eve of Man, the first in a YA trilogy. Tom's books have been translated into thirty-two languages and counting. He is also a songwriting, guitar-playing, Guinness World Record-holding, diaper-changing, galaxy-defending dad!

GREG ABBOTT is an illustrator and graphic designer. He created the adorable illustrations for There's a Monster in Your Book, There's an Elf in Your Book, and There's a Dragon in Your Book. In addition to children's books, Greg has created apparel, prints, toys, greeting cards, and other merchandise. He lives in West Sussex, England. Visit him on Tumblr at gregabbott.tumblr.com.