Beyond Religion: Ethics for a Whole World (Paperback) 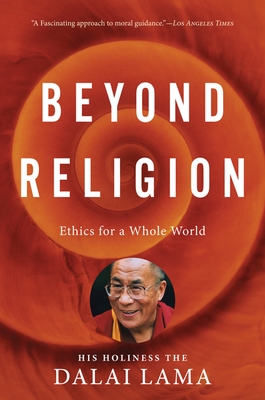 Beyond Religion: Ethics for a Whole World (Paperback)

An unprecedented literary event: a beloved world religious leader proposes a way to lead an ethical, happy, and spiritual life beyond religion and offers a program of mental training for cultivating key human values.

Over twenty years ago, in his best-selling Ethics for a New Millennium, His Holiness the Dalai Lama first proposed an approach to ethics based on universal rather than religious principles. In Beyond Religion, the Dalai Lama, at his most compassionate and outspoken, elaborates and deepens his vision for the nonreligious way.

Transcending the mere “religion wars,” he outlines a system of ethics for our shared world, one that gives full respect to religion. With the highest level of spiritual and intellectual authority, the Dalai Lama makes a stirring appeal for what he calls a “third way,” a path to an ethical and happy life and to a global human community based on understanding and mutual respect.

Beyond Religion is an essential statement from the Dalai Lama, a blueprint for all those who may choose not to identify with a religious tradition, yet still yearn for a life of spiritual fulfillment as they work for a better world.

Tenzin Gyatso, His Holiness the Fourteenth Dalai Lama, is the spiritual and temporal leader of the Tibetan people. His tireless efforts on behalf of human rights and world peace have brought him international recognition. He is the recipient of the Raoul Wallenberg Congressional Human Rights Award, the Albert Schweitzer Award, the Congressional Gold Medal, and the Nobel Peace Prize.

"An impressive guide for teaching religious tolerance and respect to readers of all ages."
--Kirkus Reviews "This wise, humane book, an original work rather than a collection of talks, is an incisive statement of His Holiness’s thinking on ways to bring peace to a suffering world. "
--Publishers Weekly —