Distribution Habitat and Social Organization of the Florida Scrub Jay: With a Discussion of the Evolution of Cooperative Breeding in New World Jays (Hardcover) 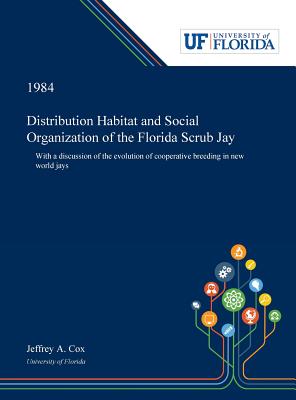 Distribution Habitat and Social Organization of the Florida Scrub Jay: With a Discussion of the Evolution of Cooperative Breeding in New World Jays (Hardcover)

Abstract: Florida Scrub Jays (FSJs) have declined significantly in numbers because of habitat destruction. FSJs have disappeared entirely from six counties in Florida, and their numbers have decreased substantially in seven additional counties. I estimated the total population size in 1982 to be 15,330-22,530 birds, of which 13,100-20,310 were on protected sites. FSJ numbers will continue to decline as the commercial development of Florida proceeds, but the total population size should stabilize at about 12,780-19,780 birds in a few decades. The greatest densities of FSJs are in areas with oak thickets 1-3m tall covering 50-75% of the ground, 10-5-% bare ground, and scattered small trees. Some FSJ populations, however, are found in areas with very few oaks, demonstrating their ability to survive in marginal habitats. Fire is effective, and sometimes essential, in maintaining the habitat in a suitable condition. Mechanical clearing of vegetation, including clear-cutting in Ocala National Forest (ONF), can be an effective substitute for fire. Scrub Jays in ONF inhabit stands of sand pine scrub clearcut from 1965-1978. Clearcuts can support FSJs only from about 3-5 to 12-15 years after clearing. By the time a young male FSJ is old enough to claim part of his parents' territory, the habitat may no longer be suitable. Because of the continual creation of new habitat, FSJs in ONF are found in smaller groups than those at Archbold Biological Station, Florida. Blue Jays in Florida typically breed as pairs, but one nest was found that was attended by two males and one female. Behavior of the adults at this nest suggests that this incident was unusual. Florida Blue Jays do not defend territories, but have broadly overlapping home ranges. The evolution of cooperative breeding in New World jays is discussed. Some of the observed forms of cooperative breeding may not be adaptive, but represent either responses to life in heavily disturbed habitats or the expression of normal parental behavior before a bird becomes a breeder. Dissertation Discovery Company and University of Florida are dedicated to making scholarly works more discoverable and accessible throughout the world. This dissertation, "Distribution Habitat and Social Organization of the Florida Scrub Jay" by Jeffrey A. Cox, was obtained from University of Florida and is being sold with permission from the author. A digital copy of this work may also be found in the university's institutional repository, IR@UF. The content of this dissertation has not been altered in any way. We have altered the formatting in order to facilitate the ease of printing and reading of the dissertation.