Dancing at the Pity Party (Hardcover) 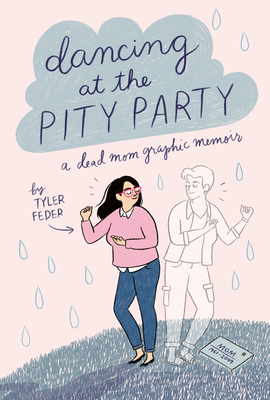 Dancing at the Pity Party (Hardcover)

From before her mother's first oncology appointment through the stages of her cancer to the funeral, sitting shiva, and afterward, when she must try to make sense of her life as a motherless daughter, Tyler Feder tells her story in this graphic novel that is full of piercing--but also often funny--details. She shares the important post-death firsts, such as celebrating holidays without her mom, the utter despair of cleaning out her mom's closet, ending old traditions and starting new ones, and the sting of having the "I've got to tell Mom about this" instinct and not being able to act on it. This memoir, bracingly candid and sweetly humorous, is for anyone struggling with loss who just wants someone to get it.
Tyler Feder is a Chicago-based artist whose work explores Big Feelings, feminism, and pop culture. She graduated from Northwestern University with a BA in Radio/TV/Film and a fancy certificate in Creative Writing for the Media. After college, she studied comedy writing at The Second City Training Center and began posting drawings online, both of which were equal parts thrilling and terrifying. Since then, Tyler has illustrated Cristen Conger and Caroline Ervin’s Unladylike, Leah Henderson’s Together We March, and many angsty self-portraits. Tyler wrote and illustrated the acclaimed picture book Bodies Are Cool, and she continues to sell prints and the occasional portrait at her long-running Etsy shop, Roaring Softly. Tyler’s favorite color is pink (obviously).
Sydney Taylor Young Adult Book Award Winner
School Library Journal Best Book of 2020
YALSA Quick Picks for Reluctant Young Adult Readers List
YALSA Great Graphic Novels for Teens List
YALSA Excellence in Nonfiction Nominee

★ "Sincere but not sappy, this bittersweet and affecting meditation on the author’s experiences also serves as a heartfelt celebration of her mother’s life.” —Horn Book

★ "Equal parts celebration, reflection, and mourning, this graphic memoir touches on the unpredictable path of grief . . . Grieving teens will find incredible solace in Feder’s story; all readers will be stirred by this wrenching yet uplifting musing." —School Library Journal, starred review

★ "Feder takes readers along on the nightmare road trip that nobody wants to make in a frank and funny, intimate and poignant graphic novel . . . The narrative, in peppily solid panel art, is exceptionally articulate and accessible." —BCCB, starred review

★ “Grief can be crushing, but this heartfelt memoir will comfort those who have known it and gently show those who haven’t how to help and what to expect.” —Booklist, starred review

"The pastel-toned illustrations effectively convey Feder's youth and the intensity of her emotions while emphasizing the ultimate message of survival and resilience in the face of life-changing grief. Cathartic and uplifting." —Kirkus Reviews