My Drunk Kitchen Holidays!: How to Savor and Celebrate the Year: A Cookbook (Hardcover) 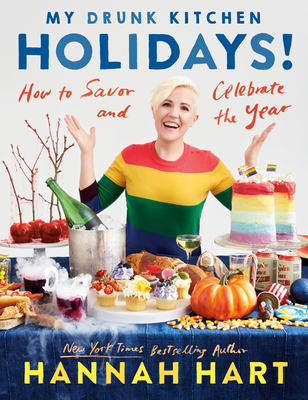 My Drunk Kitchen Holidays!: How to Savor and Celebrate the Year: A Cookbook (Hardcover)


Email or call for price
New York Times bestselling author and Food Network star Hannah Hart is back with her biggest book ever: a humorous holiday cookbook celebrating year-round festivities with food, drink, and friends.

In a world where everyone is looking for some good news and something to celebrate, Hannah Hart is there with almost fifty ideas, arranged into twelve months of themes and recipes for how to celebrate with family and friends.

A collection of recipes, activities, and suggestions about hilarious and joyous ways to celebrate with family, friends, pets, and your entire community, My Drunk Kitchen Holidays! will commemorate holidays from Valentine's Day to Graduation, Pride Month and International Left-Handers’ Day (really!). The book will culminate with the fall holidays that get much deserved attention: recipes for Halloween, Thanksgiving, and a celebration of Hanukkah/Kwanzaa/Christmas that is festive, inclusive, and incredibly hilarious.
Hannah Hart is an entertainer, food enthusiast, and two-time New York Times bestselling author (Buffering: Unshared Tales of a Life Fully Loaded and My Drunk Kitchen: A Guide to Eating, Drinking, and Going with Your Gut). Since creating the YouTube series My Drunk Kitchen, Hart has co-produced and starred in multiple films and hosted her own show on the Food Network, I Hart Food. In 2018, Hart launched Hannahlyze This, the self-help podcast that just can’t help itself. She currently produces and hosts Tasty’s Edible History on Facebook. Hart’s consistent authenticity in her content has established her as one of the most influential voices in the LGBTQ community and gained her recognition as one of Hollywood Reporter’s New Digital Disruptors and one of Forbes’ 30 Under 30. Born and raised in Northern California, Hannah currently resides in Los Angeles with her fiancée and two cats.