I'll Be Your Polar Bear (Hardcover) 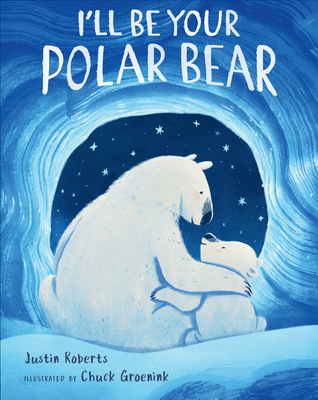 I'll Be Your Polar Bear (Hardcover)


On Our Shelves Now
From 4-time Grammy nominee Justin Roberts comes a heartfelt picture book about the lengths a father will go to in order to comfort and protect his child.

Because you and I,
we’re two of a pair:
you’re my everything,
and I’m your polar bear.

On a wintry walk in the twilight, a father and child’s antics come to resemble those of playful polar bears. As they tumble through the snow, explore icy caves, and push against the wind, Dad is a constant source of reassurance, comfort, and even a cozy ride home.

Tender illustrations and delicate verse create a playful and warm book that will help parents show their children that even through ups and downs, they will always be there.
Justin Roberts, four-time Grammy nominee, has been called “the Judy Blume of Kiddie Rock” by The New York Times, and USA Today says he’s “Hands down the best songwriter in the genre.” He has also been praised for his deft and heartfelt lyrics by Entertainment Weekly, NPR, People Magazine, and the Los Angeles Times. He is also the author of The Smallest Girl in the Smallest Grade, illustrated by Christian Robinson. Justin lives near Chicago with his family.

Chuck Groenink grew up in the Netherlands, where he spent his formative years climbing trees, drawing, reading, and cycling. He attended the Artez Institute of Visual Arts in Kampen, graduating from its department of Illustration in 2004. Since 2010 he has resided in the United States, going from Portland, Oregon, to Kinderhook, New York where he lives with his wife, dog, three cats, and several rowdy chickens.

Praise for I'll Be Your Polar Bear: