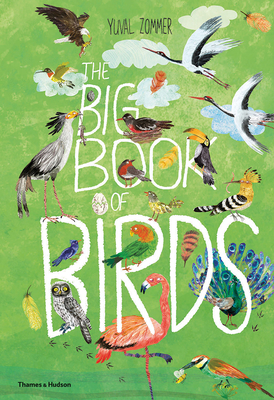 The next Big Book in the series introduces young children to some of the most colorful, magnificent, silly, and surprising feathered creatures from around the world.

Following up the hugely successful The Big Book of Bugs, The Big Book of Beasts, and The Big Book of the Blue, The Big Book of Birds is a fact-filled tour of the world’s most wonderful winged creatures. Yuval Zommer’s distinctive illustrations show off some of the most colorful, flamboyant, impressive, and wacky birds of the sky. Picture-book charm pairs with informative nonfiction to make a beautiful, large-format title for parents to share with young children and for older children to read by themselves.

The book draws in children and parents alike with captivating information about and charming illustrations of hummingbirds, peacocks, flamingos, bald eagles, secretary birds, puffins, red-crowned cranes, and more. The book also invites young bird-watchers to protect birds where they live and make their gardens bird-friendly. The text is chatty, funny, and full of remarkable facts.

Yuval Zommer’s illustrations and fresh approach are what make this series feel distinct. His glorious and quirky pictures appeal to young children, who will relish the flighty questions and pithy facts about the most exciting creatures of the sky.

Yuval Zommer is an author, illustrator, and environmentalist based in London. He studied at the Royal College of Art and worked for many years as a creative director at leading advertising agencies before becoming an author and illustrator. His award-winning Big Book series has been published in twenty-five languages and has over one million copies in print.
The watercolor illustrations joyously spill across pages, portraying an amazing variety of feathered creatures busily interacting with each other… This is a book that needs to be looked at again and again, slowly and carefully; the perusal will result in fresh discoveries every time.
— Booklist

Written and organized in similar format to his previous titles, Zommer’s magical illustrations will draw the reader into the captivating world of birds… A careful walk through this book will prove to be an enjoyable one, perhaps leading some…to become instant bird aficionados.
— School Library Journal