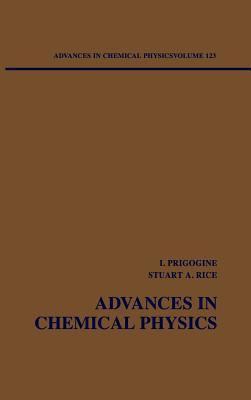 This is book number 123 in the Advances in Chemical Physics series.

The latest edition of the leading forum in chemical physics Edited by Nobel Prize winner Ilya Prigogine and renowned authority Stuart A. Rice. The Advances in Chemical Physics series provides a forum for critical, authoritative evaluations in every area of the discipline. In a format that encourages the expression of individual points of view, experts in the field present comprehensive analyses of subjects of interest. This stand-alone, special topics volume reports recent advances in electron-transfer research, with significant, up-to-date chapters by internationally recognized researchers. Volume 123 collects innovative papers on Transition Path Sampling, Dynamics of Chemical Reactions and Chaos, The Role of Self Similarity in Renormalization Group Theory, and several other related topics. Advances in Chemical Physics remains the premier venue for presentations of new findings in its field.
ILYA PRIGOGINE is Director of the Instituts Internationaux de Physique et de Chimie, E. Solvay, Brussels, Belgium. Dr. Prigogine is also the Ashbel Smith Professor of Physics at The University of Texas at Austin, where he is also Director of the Ilya Prigogine Center for Studies in Statistical Mechanics and Complex Systems. In 1977 he was awarded the Nobel Prize in Chemistry. STUART A. RICE received his master's and doctorate from Harvard University and was a Junior Fellow at Harvard for two years before joining the faculty of The University of Chicago in 1957 where he remains a well-known theoretical chemist who also does experimental research and is currently the Frank P. Hixon Distinguished Service Professor Emeritus at The University of Chicago. Professor Rice has served the university in a wide variety of capacities during his forty-eight year tenure. He served as the director of the James Franck Institute (the university's center for physical chemistry and condensed matter physics) from 1961 to 1967, was Chairman of the Department of Chemistry from 1971 to 1976 and was Dean of the Physical Sciences Division from 1981 to 1995. In 1999 he received the National Medal of Science.In addition to his work at the University, he is currently on the Board of Governors at Argonne National Laboratory, managed by and affiliated with The University of Chicago, as well as Tel Aviv University. He has served as editor for Chemical Physics Letters, in addition to the series on Advances in Chemical Physics. He currently maintains a full research lab but has retired from teaching classes.