A Matter of Density: Exploring the Electron Density Concept in the Chemical, Biological, and Materials Sciences (Hardcover) 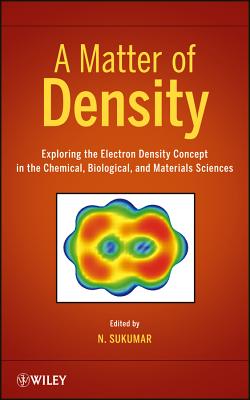 A Matter of Density: Exploring the Electron Density Concept in the Chemical, Biological, and Materials Sciences (Hardcover)

The origins and significance of electron density in the chemical, biological, and materials sciences

Electron density is one of the fundamental concepts underlying modern chemistry and one of the key determinants of molecular structure and stability. It is also the basic variable of density functional theory, which has made possible, in recent years, the application of the mathematical theory of quantum physics to chemical and biological systems.

With an equal emphasis on computational and philosophical questions, A Matter of Density: Exploring the Electron Density Concept in the Chemical, Biological, and Materials Sciences addresses the foundations, analysis, and applications of this pivotal chemical concept. The first part of the book presents a coherent and logically connected treatment of the theoretical foundations of the electron density concept. Discussion includes the use of probabilities in statistical physics; the origins of quantum mechanics; the philosophical questions at the heart of quantum theory, like quantum entanglement; and methods for the experimental determination of electron density distributions.

An essential reference for students as well as quantum and computational chemists, physical chemists, and physicists, this book offers an unparalleled look at the development of the concept of electron density from its inception to its role in density functional theory, which led to the 1998 Nobel Prize in Chemistry.

N. SUKUMAR, PhD, is Professor, Head of the Department of Chemistry and Director of the Center for Informatics at Shiv Nadar University, India. He is also associated with the Rennselaer Exploratory Center for Cheminformatics Research at Rennselaer Polytechnic Institute. He has lectured at conferences throughout the world and authored numerous review articles, research papers, and book chapters.