What Was the Age of the Dinosaurs? (What Was?) (Paperback) 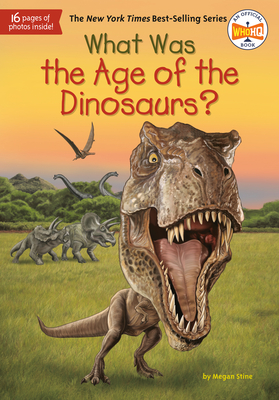 What Was the Age of the Dinosaurs? (What Was?) (Paperback)


On Our Shelves Now
Travel back to the time when the mighty dinosaurs ruled the earth.

The Age of Dinosaurs began about 250 million years ago. In the beginning they were quite small but over time they evolved into the varied and fascinating creatures that captivate our imaginations today. What we know about dinosaurs is evolving, too! We've learned that some dinosaurs were good parents, that dinosaurs could grow new teeth when old ones fell out, and that most dinosaurs walked on two legs. We've even discovered that birds are modern relatives of dinosaurs!
Megan Stine has written several books for young readers, including Where Is the White House?, Who Was Marie Curie?, Who Was Ulysses S. Grant?, Who Is Michelle Obama?, and Who Was Sally Ride? She lives in Clinton, Connecticut.