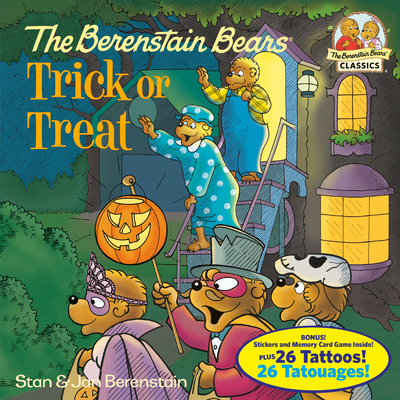 
On Our Shelves Now
Carve out family time for this special deluxe edition of the classic Halloween-themed story with the Berenstain Bears—full of treats including stickers, temporary tattoos, and a memory card game!

Come for a visit in Bear Country in Stan and Jan Berenstain's beloved classic. It’s Halloween and Brother and Sister can’t wait to go trick-or-treating with all of their friends, but when someone in the group encourages the kids to play a trick, things don’t go as planned. All little cubs can celebrate Halloween and learn about how to be a good friend and neighbor with this deluxe addition that makes the perfect gift for Fall!
Stan and Jan Berenstain were already successful cartoonists for magazines and adult humor books when they began writing children's books. The first story starring the bear family, The Big Honey Hunt, appeared in 1962. Since then, more than 300 Berenstain Bears books have been published and more than 260 million copies have been sold. What began as an idea sparked by their young sons’ love of reading has become over the years arguably the best-selling children’s book series ever. Since their inception, the Berenstain Bears stories have expanded to include picture books, beginning readers, and chapter books—even a hit TV show on PBS. Writing and illustrating the books has become a Berenstain family affair. Mike joined with his parents as a creative team in the late 1980s. The Bear family has expanded over the years as well. Sister Bear arrived in 1974, and baby Honey joined the family in 2000.