Spy Secrets That Can Save Your Life: A Former CIA Officer Reveals Safety and Survival Techniques to Keep You and Your Family Protected (Paperback) 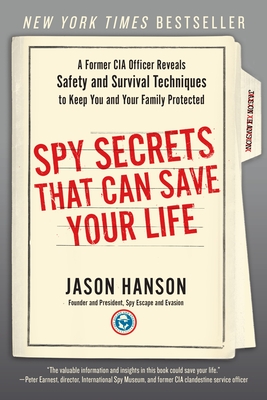 Spy Secrets That Can Save Your Life: A Former CIA Officer Reveals Safety and Survival Techniques to Keep You and Your Family Protected (Paperback)


Usually Arrives to Store in 1-5 Days
The New York Times bestseller that reveals the safety, security, and survival techniques that 99% of Americans don’t know—but should

When Jason Hanson joined the CIA in 2003, he never imagined that the same tactics he used as a CIA officer for counter intelligence, surveillance, and protecting agency personnel would prove to be essential in every day civilian life.

In addition to escaping handcuffs, picking locks, and spotting when someone is telling a lie, he can improvise a self-defense weapon, pack a perfect emergency kit, and disappear off the grid if necessary. He has also honed his “positive awareness”—a heightened sense of his surroundings that allows him to spot suspicious and potentially dangerous behavior—on the street, in a taxi, at the airport, when dining out, or in any other situation.

In his engaging and empowering book Spy Secrets That Can Save Your Life, Jason shares this know-how with readers, revealing how to:


•  prevent home invasions, carjackings, muggings, and other violent crimes
•  run counter-surveillance and avoid becoming a soft target
•  recognize common scams at home and abroad
•  become a human lie detector in any setting, including business negotiations
•  gain peace of mind by being prepared for anything instead of uninformed or afraid

With the skill of a trained operative and the relatability of a suburban dad, Jason Hanson brings his top-level training to everyday Americans in this must-have guide to staying safe in an increasingly dangerous world.
Jason Hanson is a former CIA officer, security specialist, winner of ABC’s reality show Shark Tank, and the author of Agent of Influence, the New York Times bestseller Spy Secrets That Can Save Your Life, and Survive Like a Spy. He teaches everyday citizens to defend themselves at his Spy Escape and Evasion school. Hanson has been interviewed by major media outlets for his security expertise including, The Wall Street Journal, Fox News and The Huffington Post. He currently lives in Cedar City, Utah, with his family.
"The secrets Jason reveals in this book have literally saved my life. I used what Jason taught me to escape a potential kidnapping and an attack. I’ll be forever grateful for the techniques he shared with me.”
--Heather O’Brien Walker, motivational speaker and life coach ​

“When I first met Jason Hanson while he was pitching me his business on Shark Tank, I knew that his company was going to be a winner--and more importantly that I might learn some tips that could one day save my life!”
--Daymond John, star of ABC’s Shark Tank

“You probably have heard me say before that if I wasn’t a cook, I would have loved to be a spy! Jason Hanson lets us all be secret agents by giving us the 411 on how to get out of potential 911 situations.  With his inner secrets of the CIA, he can show you tips and tricks that could save you and your families’ lives!”
--Rachael Ray

Jason Hanson is a powerful proponent and practitioner of personal defense tools and techniques, all designed to protect you and your family in your daily lives, at home, and even while traveling.  The valuable information and insights in this book, the same material he delivers in classes all over the country, could save your life.
--Peter Earnest, Director, International Spy Museum & Former CIA Clandestine Service Officer

“’Trade Craft’ refers to a functional yet mythical set of skills every warrior, operator or operative hopes to develop and master as they execute the duties of their trade; Jason Hanson has forgotten more trade craft than most will ever know.  I have read many books and manuals focused on teaching and explaining these skill sets, but few hit the mark as cleanly, effectively and as easily digestible as Spy Secrets.  This book is overflowing with practical knowledge and teaching points that can and will save your life.  Navy SEALs study all of the elements from this book, but I was stunned to glean so many secrets of the trade that will now join my bag of tricks on and off the battlefield.”
--Rorke Denver, Navy SEAL and New York Times bestselling author of Damn Few