Your Driver Is Waiting: A Novel (Hardcover) 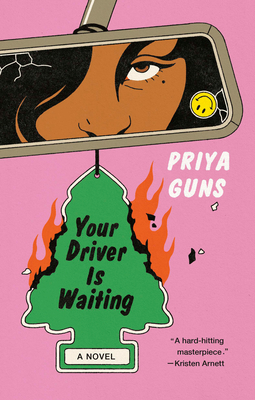 Your Driver Is Waiting: A Novel (Hardcover)


Coming Soon - Available for Pre-Order Now
A MOST ANTICIPATED BOOK OF THE YEAR • In this electrifyingly fierce and funny social satire—inspired by the iconic 1970s film Taxi Driver—a ride share driver is barely holding it together on the hunt for love, dignity, and financial security...until she decides she's done waiting. • “What you are about to read is a call to arms. Best to prepare for a confrontation." —New York Times Book Review

"A perfect gut punch of a novel…Full of love and real friendship and frustrations boiled over and the urge to burn everything down…[The] writing is laser-focused and hilarious and full of aching need. This is a hard-hitting masterpiece.—Kristen Arnett, author of With Teeth and Mostly Dead Things

Damani is tired. Her father just died on the job at a fast-food joint, and now she lives paycheck to paycheck in a basement, caring for her mom and driving for an app that is constantly cutting her take. The city is roiling in protests--everybody's in solidarity with somebody--but while she keeps hearing that they’re fighting for change on behalf of people like her, she literally can’t afford to pay attention.

Then she gives a ride to Jolene (five stars, obviously). Jolene seems like she could be the perfect girlfriend--attentive, attractive, an ally--and their chemistry is off the charts. Jolene’s done the reading, she goes to every protest, and she says all the right things. So maybe Damani can look past the one thing that's holding her back: she’s never dated anyone with money before, not to mention a white girl with money. But just as their romance intensifies and Damani finally lets her guard down, Jolene does something unforgivable, setting off an explosive chain of events.

A wild, one-sitting read brimming with dark comedy, and piercing social commentary and announcing Priya Guns's feverishly original voice, Your Driver Is Waiting is a crackling send-up of our culture of modern alienation.
PRIYA GUNS is an actor and writer previously published in short story anthologies, gal-dem, Spring magazine, and anonymously in the Guardian. She is a Creative Writing graduate from Kingston University. Your Driver Is Waiting is her debut novel.
Named a Most Anticipated Book of the Year by BuzzFeed, Vogue, Nylon, Bustle, LitHub, The Millions, Autostraddle, Good Housekeeping, & more

"Your Driver Is Waiting is an ambitious project, taking on performative allyship, racial discrimination and the class system all at once...The novel's greatest strength [is] a ferocity of voice that belongs to Guns alone...What you are about to read is a call to arms. Best to prepare for a confrontation."
—Camille Perri, New York Times Book Review

"A retelling of the movie Taxi Driver featuring a ride-share driver? An incredible premise for a novel that explores work, class, and solidarity (or the lack thereof)."
—Lydia Kiesling, The Millions

"A queer feminist retelling of the 1970's film Taxi Driver, this one had me laughing loud enough to draw looks on the subway, and that takes some doing. It's a crackling social commentary on the social justice movements of our time, the gig economy, performative wokeness and who gets to speak on behalf of the disadvantaged. It's a fast-paced read that begs to be devoured."
—Good Housekeeping

"Priya Guns’s Your Driver is Waiting is a fierce and dynamic debut about Damani, a gig worker for a driving app who’s just trying to make enough money to survive as the city she lives in erupts in protest. When she falls for Jolene, a rich white woman who attends every protest, their romance takes Damani down a path she can’t escape from. Darkly comedic and piercing in its social commentary, Guns’s debut immediately marks her as a writer to watch for years to come."
—Chicago Review of Books

"Priya Guns’ darkly humorous satire follows a South Asian rideshare driver through her days dealing with passengers’ microaggressions, drunkards’ vomit, and an epidemic of bad tippers. Things go from bad to worse after she meets a femme fatale in the form of a white self-proclaimed ally who turns out to be nothing of the sort."
—CrimeReads

“Priya Guns’s Your Driver is Waiting is so real it’s scary. A young woman, living in a nameless city where new causes pop up daily like pubescent pimples, struggles to decide where her true duty––to self, family, humanity––resides. Guns expertly exposes the palpable dangers of ‘well-meaning’ white folks and calls into question who, if anyone, is to be held accountable for the growing ills of modern society. However, she also shows us that a brighter world isn’t in our rear-view, but right in front of us, so long as we choose to drive on. You’ll want to take this ride.”
—Mateo Askaripour, New York Times bestselling author of Black Buck

“A ferocious new voice. A fierce and immersive debut. A story that made me rock back and forth with awe. Priya Guns's voice blazes on the page with humor, heart, and a fortitude that is inspiring to behold. There's no doubt who's in the drivers' seat. I was just grateful to be along for the ride.”
—Weike Wang, author of Joan is Okay and Chemistry

"Your Driver Is Waiting is a perfect gut punch of a novel. This is my favorite kind of writing, full of love and real friendship and frustrations boiled over and the urge to burn everything down. Priya Guns is phenomenal here, her writing is laser-focused and hilarious and full of aching need. This is a hard-hitting masterpiece. I devoured it."
—Kristen Arnett, author of With Teeth and Mostly Dead Things

"A compelling character study with an electrifying ending, Your Driver is Waiting offers a potent social critique overflowing with love, despair, passion, and rage. Priya Guns brings to the page a voice infused with both bravado and vulnerability in this madcap story you won’t want to put down."
—Rachel Yoder, author of Nightbitch

"From page one, this novel had its hands around my neck. A voice that is somehow simultaneously fearless and intensely vulnerable. The only thing slicker than her narrator's driving is Guns's ability to deliver sharp social commentary that will make you unsure of whether you want to laugh or cry. Your Driver Is Waiting is an unhinged joyride—whether you buckle up or not, you're sure to be gripping the edge of your seat."
—Jean Kyoung Frazier, author of Pizza Girl

"In powerful and unrelenting prose, Priya Guns's Your Driver is Waiting has accomplished a nearly impossible feat: scathing social commentary about the inequalities of modern day America in a propulsive, funny and tender story about love, community and loss. Damani is an unforgettable heroine that now lives rent-free in my heart. Welcome her into yours."
—Cleyvis Natera, author of Neruda on the Park

"Your Driver Is Waiting captures something vital about our contemporary moment, about the millions of lives spent on the margins. It’s deft enough to navigate questions of class, precarity, race and economic displacement, while managing to be so full of hope, full of fight, full of heart."
—Keiran Goddard, author of Hourglass

"Six months after her father's death, ride-share driver Damani endures inconsistent hours, low pay, and disastrous interactions to support herself and her mother...It's Damani's ferocious heart that makes Guns' debut impossible to put down; Damani's a lover and a fighter, start to finish."
—Booklist (starred review)