How to Make an Apple Pie from Scratch: In Search of the Recipe for Our Universe, from the Origins of Atoms to the Big Bang (Hardcover) 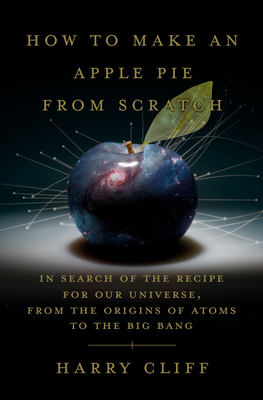 How to Make an Apple Pie from Scratch: In Search of the Recipe for Our Universe, from the Origins of Atoms to the Big Bang (Hardcover)


Usually Arrives to Store in 1-5 Days
NAMED A BEST SCIENCE BOOK OF 2021 BY KIRKUS * An acclaimed experimental physicist at CERN takes you on an exhilarating search for the most basic building blocks of our universe, and the dramatic quest to unlock their cosmic origins.  "A fascinating exploration of how we learned what matter really is, and the journey matter takes from the Big Bang, through exploding stars, ultimately to you and me." (Sean Carroll)

Carl Sagan once quipped, “If you wish to make an apple pie from scratch, you must first invent the universe.” But finding the ultimate recipe for apple pie means answering some big questions: What is matter really made of? How did it escape annihilation in the fearsome heat of the Big Bang? And will we ever be able to understand the very first moments of our universe?

In How to Make an Apple Pie from Scratch, Harry Cliff—a University of Cambridge particle physicist and researcher on the Large Hadron Collider—sets out in pursuit of answers. He ventures to the largest underground research facility in the world, deep beneath Italy's Gran Sasso mountains, where scientists gaze into the heart of the Sun using the most elusive of particles, the ghostly neutrino. He visits CERN in Switzerland to explore the "Antimatter Factory," where the stuff of science fiction is manufactured daily (and we're close to knowing whether it falls up). And he reveals what the latest data from the Large Hadron Collider may be telling us about the fundamental nature of matter.

Along the way, Cliff illuminates the history of physics, chemistry, and astronomy that brought us to our present understanding—and misunderstandings—of the world, while offering readers a front-row seat to one of the most dramatic intellectual journeys human beings have ever embarked on.

A transfixing deep dive into the origins of our world, How to Make an Apple Pie from Scratch examines not just the makeup of our universe, but the awe-inspiring, improbable fact that it exists at all.
HARRY CLIFF is a particle physicist based at the University of Cambridge and carries out research with the LHCb experiment at CERN’s Large Hadron Collider. He was a curator at the Science Museum, London for seven years and regularly gives public lectures and makes TV and radio appearances. His 2015 TED talk "Have We Reached the End of Physics?" has been viewed more than 3 million times.

"A delightfully fresh and accessible account of one of the great quests of science—to identify and understand the ultimate building blocks of the Universe. Physicist Harry Cliff has found a recipe for an easily digestible approach, and the results go down a treat."
—Graham Farmelo, author of The Strangest Man and the The Universe Speaks in Numbers

“I love this book. It’s fun, fast-paced and beautifully written. It covers a vast amount of ground while remaining easy to read: from the birth of modern chemistry through to the very latest ideas in particle physics. All done with a light-hearted rigor. It’s the best book of its type I have read. Brilliant.”
—Jeff Forshaw, internationally bestselling co-author of The Quantum Universe and Why Does E=mc2?

“Cliff expertly constructs an up-to-date picture of our modern understanding of the cosmos…[This book] lays out not just what we know, but how we found out (and what is left to be discovered), and gives us intriguing glimpses into the lives of the thinkers and tinkerers who put all the pieces together for us.”
—Katie Mack, author of The End of Everything

"Why is there stuff? Where did it all come from? Harry Cliff brings an experimental physicist's willingness to get his hands dirty to these philosophical-sounding questions. This book is a fascinating exploration of how we learned what matter really is, and the journey matter takes from the Big Bang, through exploding stars, ultimately to you and me."
—Sean Carroll, New York Times bestselling author of Something Deeply Hidden

"If you're looking for a popular science book that truly brings alive the thrill of particle physics research and what we have discovered about the building blocks of the Universe, then I urge you to look no further. Cliff's engaging and personable writing style, along with his infectious enthusiasm, follows in the best traditions of Feynman and Sagan. I don't say this very often about popular science writing, but this book really is a page-turner."
—Jim Al-Khalili, author of The World According to Physics

"A witty, approachable and captivating explanation of why there is not merely something, but there are so many things, rather than nothing. After reading book this, every time you eat a pie you'll find yourself contemplating the universe and why exactly there is one in the first place—a wild ride through the remarkable adventures and thoughts that have led to a species beginning to work out why it is and why everything else is too."
—Robin Ince, bestselling co-author of The Infinite Monkey Cage: How to Build a Universe

"Cliff draws readers into the bizarre and beautiful world inside the atom....[An] outstanding book, sometimes as funny as The Hitchhiker's Guide to the Galaxy.... The book for anyone who wants to understand some of the world’s most important scientific questions."
—Kirkus (starred review)

“Fascinating…Cliff is an expert writer who artfully takes on a complex subject in a comprehensible, entertaining, and humorous manner.”
—Library Journal (starred review)

"An enthusiastic tour of the universe and modern physics....Enlightening....Cliff describes complex ideas vividly and accessibly, and he’s got a knack for making theory exciting. This enlightening and entertaining outing is worth savoring."
—Publishers Weekly (starred review)

"Particle physicist Cliff expertly mixes chemistry, physics, a dash of astronomy, and an abundance of humor, offering everyone interested in baking and the universe the most thorough and wonderfully appealing apple pie recipe of all time…Cliff’s rich use of metaphor and analogy provides readers with fascinating and easily digestible summaries of major discoveries by legendary scientific minds past and present as he masterfully reassembles the history of human understanding into an astounding confection."
—Booklist