Notes from an Apocalypse: A Personal Journey to the End of the World and Back (Hardcover) 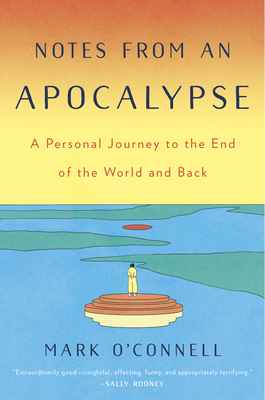 Notes from an Apocalypse: A Personal Journey to the End of the World and Back (Hardcover)

By the author of the award-winning To Be a Machine, an absorbing, deeply felt book about our anxious present tense—and coming to grips with the future

We're alive in a time of worst-case scenarios: The weather has gone uncanny. Old postwar alliances are crumbling. A pandemic draws our global community to a halt.  Everywhere you look there's an omen, a joke whose punchline is the end of the world. How is a person supposed to live in the shadow of such a grim future? What does it mean to have children—nothing if not an act of hope—in such unsettled times? What might it be like to live through the worst? And what on Earth is anybody doing about it?

Dublin-based writer Mark O'Connell is consumed by these questions—and, as the father of two young children himself, he finds them increasingly urgent. In Notes from an Apocalypse, he crosses the globe in pursuit of answers. He tours survival bunkers in South Dakota. He ventures to New Zealand, a favored retreat of billionaires banking on civilization's collapse. He engages with would-be Mars colonists, preppers, right-wing conspiracists. And he bears witness to those places, like Chernobyl, that the future has already visited—real-life portraits of the end of the world as we know it. In doing so, he comes to a resolution, while offering readers a unique window into our contemporary imagination.

Both investigative and deeply personal, Notes from an Apocalypse is an affecting, humorous, and surprisingly hopeful meditation on our present moment. With insight, humanity, and wit, O'Connell leaves you to wonder: What if the end of the world isn't the end of the world?
MARK O'CONNELL is the author of To Be a Machine, which was awarded the 2019 Rooney Prize for Irish Literature and the 2018 Wellcome Book Prize and short-listed for the Baillie Gifford Prize for Non-Fiction. He is a contributor to The New York Times Magazine, Slate, and The Guardian. He lives in Dublin with his family.
*Best Books of 2020 —The Guardian
*Best Books of 2020 —Esquire
*Favorite Books of 2020 —Washington Independent Review of Books
*Critics’ Picks for Summer 2020 —Financial Times
*Best Books for Summer 2020 —The Times (UK)
*Best Books of 2020 So Far —Irish Times
*Books More People Should Read —AV Club


"There is fertile territory between the terror [Notes from an Apocalypse] articulates and the faltering, yet still revolving, world in which we suddenly live. Its success is also testament to its author’s literary flair, psychological acuity, and evergreen eschatological meditations. Which is to say: It is smart, funny, irreverent, and philosophically rich."
—Wall Street Journal

"A fitting travelogue for our stationary moment...O’Connell’s 'future-dread' haltingly yields to faith in humanity’s resilience, resourcefulness, and capacity for cooperation."
—New Yorker

“Extraordinarily good—insightful, affecting, funny, and appropriately terrifying. The perfect handbook for the end times. Mark O’Connell is a truly brilliant writer and Notes from an Apocalypse could hardly be more incisive, or more timely.”
—Sally Rooney, author of Normal People and Conversations with Friends

“Anyone with open eyes lives today bound by apocalyptic fears for the future and the maddening same-ness that defines the present day. Notes from an Apocalypse is a penetrating investigation into that new uncanny, which shapes both our collective indifference and our climate rage.”
—David Wallace-Wells, author of The Uninhabitable Earth

“Notes From an Apocalypse is such a fantastic book. It's harrowing, tender-hearted and funny as hell. O'Connell proves himself to be a genius guide through all the circles of imagined and anticipated doom. Read it, then immediately buy a copy for your ‘but what's the worst that could happen?’ friend.”
—Jenny Offill, author of Weather and Dept of Speculation

"Brilliant...O’Connell excels at portraying the colorful characters who shine on an apocalyptic stage."
—Los Angeles Review of Books

“A gonzo travelogue meets philosophical meditation on the impermanence of human life in the age of climate decline…Deeply funny and life-affirming, with a warm, generous outlook even on the most challenging of subjects.”
—Esquire

"In a chain of charming, anxious, and tender essays, O'Connell examines his own apocalyptic frame of mind…Notes from An Apocalypse is a reminder to ask what else we can be—and for whom—in the meantime."
—NPR

“[A] poet laureate of human frailty, quixoticism, and creativity as they manifest in the technologic age.”
—The Millions

"Smart and surprisingly fun...A thoughtful reflection on why we prepare for the end of everything."
—GQ

“O’Connell’s prose is lucid and elegant [and] for a book on anxiety, apocalypse, and death, it’s very funny…. O’Connell’s personal conclusion, orbiting the purpose he finds in love for his wife and young children, is deeply moving.”
—Volume 1 Brooklyn

"A timely tour of preparing for the worst...Notes From an Apocalypse isn’t meant to be a response to any particular event; it’s an exploration of a sensibility...A funny, self-deprecating inquiry into [O'Connell's] own complicity."
—The New York Times

"Both wildly funny and oddly moving."
—Ed Caesar, The Guardian

"An eerily prescient mix of confession, political critique, meditation and comic monologue on living in the face of death... In this reflective, hilarious and disturbing page-turner, O’Connell makes a compelling case that connecting with nature and each other is the best way to calm our apocalyptic dread—and it might even increase our prospects of avoiding the worst."
—Nature

“O’Connell is a wry and skeptical stand-in for the reader. There is a comfort in his prose. You get the sense this writer is taking time to order his experience, to bring coherence to his anxieties—and, by extension, to some of mine.”
—Boston Globe

"O’Connell has a rare ability to be blokeish and woke, funny and frightened and sound: this is a profoundly intelligent book."
—Anne Enright, The Guardian

“Life-affirming…A contribution to the doom-and-gloom genre that might actually cheer you up.”
—Kirkus

"O'Connell is not only a sharp observer but a master at parsing the various subtexts underneath the surface rhetoric of these apocalyptic movements. This witty, profound, and beautifully told story will appeal to doomsday worriers and nonworriers alike."
—Library Journal (starred review)

“Relatable, often funny, and ultimately hopeful…A more-than-companionable guide, O'Connell sets out to understand how we live under constant threat of climate change and political terror, and finds that the answer is, more or less, we do.”
—Booklist

“A fascinating insight into a species obsessed with its own demise—and into the ways humankind is trying to confront the hard-to-bear reality of climate change…Oddly uplifting.”
—The Economist

“Delightful…A wryly amusing tour of the end of the world.”
—Financial Times

“A wise meditation on social collapse and those preoccupied with the thought of it…The book is full of wry humor, and O’Connell is an earnest, self-effacing narrator.”
—Washington Independent Review of Books

“O’Connell’s tender, amused evocation of father love is one of the best things about the book and a vivid reminder of how high the stakes are...Imagine a cross between Bill Bryson and David Foster Wallace.”
—The Times (UK)

“The brilliance of this book lies in the analysis. O’Connell is bitingly clever...[But] the best parts of the book are the personal ones...This is ultimately, surprisingly, a hopeful book...It is brilliantly done.”
—Sunday Times (UK)

“It can’t be overstated what witty, thoughtful company O’Connell is when exploring these peculiarly 21st-century dilemmas.“
—Daily Mail (UK)

"A book that’s fretful, wise, and funny, and often all three in the space of a paragraph…[O’Connell] is doing good work in difficult times. He offers us hope as well as black humour."
—Daily Telegraph (Ireland)

"One hell of a funny book. A beautiful writer with a keenly honed sense of self-deprecation and the absurd, the tangents he wanders off on are just as fascinating as the subjects he meets…A must-read."
—Irish Independent (Ireland)

"Mark O'Connell's voice is funny, charming, and humane, even as he contemplates the grimmest outcomes of the 21st century climate catastrophe. Notes from an Apocalypse is funny and endlessly thought-provoking, like Dante's Inferno, if Hell was full of libertarian Tech bros, YouTube survivalists and guys who are really into extreme camping."
—Colin Barrett, author of Young Skins