Mummies and Pyramids: A Nonfiction Companion to Magic Tree House #3: Mummies in the Morning (Library Binding) 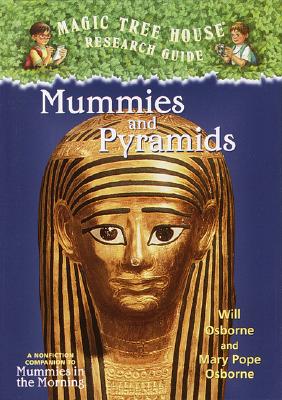 Mummies and Pyramids: A Nonfiction Companion to Magic Tree House #3: Mummies in the Morning (Library Binding)

This is book number 3 in the Magic Tree House Fact Tracker series.

How were pyramids built? Why did people make mummies? What magic charms were buried with mummies? Who discovered King Tut's tomb? Unwrap the answers to these questions and more in Magic Tree House Research Guide #3: Mummies and Pyramids, Jack and Annie's very own guide to the secrets of ancient Egypt. Includes information on hieroglyphics, how mummies were made, tomb treasures and robbers, Egyptian gods and goddesses, and much more.
WILL OSBORNE and MARY POPE OSBORNE have been married for a number of years and live in northwestern Connecticut with their three dogs, Joey, Mr. Bezo, and Little Bear. Mary is the author of over one hundred books for children, including novels, picture books, biographies, and retellings of fairy tales and world mythologies. Will has worked for many years in the theater as an actor, director, and playwright. Together he and Mary have coauthored two books of Greek mythology and eight Magic Tree House(R) Fact Trackers. Will has also written a multimedia planetarium show, Magic Tree House Space Mission, and is cocreator with Randy Courts of Magic Tree House: The Musical, a full-scale Broadway-style family musical based on Christmas in Camelot. SAL MURDOCCA has illustrated more than 200 children's trade and text books. He is also a librettist for children's opera, a video artist, an avid runner, hiker, and bicyclist, and a teacher of children's illustration at the Parsons School of Design. Sal lives and works in New York with his wife, Nancy.