Curious George Curious About Fall (tabbed board book) (Board book) 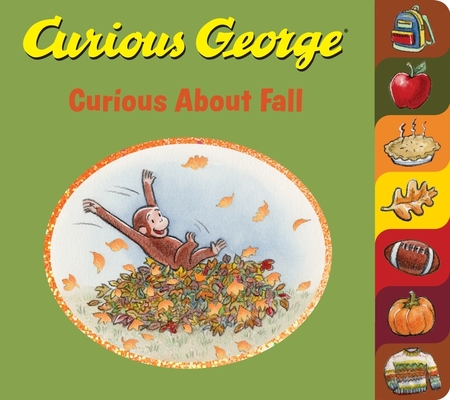 Curious George Curious About Fall (tabbed board book) (Board book)


On Our Shelves Now
Everyone’s favorite monkey, Curious George, has a fun-filled fall day in this sturdy board book with colorful tabs that’s perfect for preschoolers.

It is fall and George is excited for crisp days of cozy play. He’ll rake leaves, bake pie, play flag football, and more in this rhyming book with a shiny foil cover and tabbed pages.

Hans and Margret Rey created many books during their lives together, including Curious George, one of the most treasured classics of all time, as well as other favorites like Spotty and Pretzel. But it was their rambunctious little monkey who became an instantly recognizable icon. After the Reys escaped Paris by bicycle in 1940 carrying the manuscript for the original Curious George, the book was published in America in 1941. More than 200 Curious George titles followed, with 75 million books sold worldwide. Curious George has been successfully adapted into a major motion picture and an Emmy-winning television show on PBS. www.curiousgeorge.com.