Caesar's Last Breath: And Other True Tales of History, Science, and the Sextillions of Molecules in the Air Around Us (Paperback) 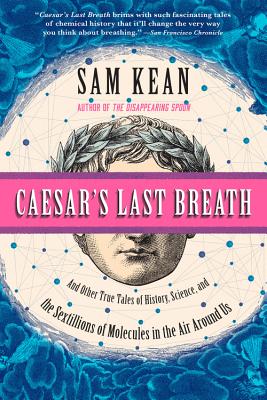 Caesar's Last Breath: And Other True Tales of History, Science, and the Sextillions of Molecules in the Air Around Us (Paperback)


Usually Arrives to Store in 1-5 Days
The Guardian's Best Science Book of 2017: the fascinating science and history of the air we breathe.

It's invisible. It's ever-present. Without it, you would die in minutes. And it has an epic story to tell.

In Caesar's Last Breath, New York Times bestselling author Sam Kean takes us on a journey through the periodic table, around the globe, and across time to tell the story of the air we breathe, which, it turns out, is also the story of earth and our existence on it. With every breath, you literally inhale the history of the world.

On the ides of March, 44 BC, Julius Caesar died of stab wounds on the Senate floor, but the story of his last breath is still unfolding; in fact, you're probably inhaling some of it now. Of the sextillions of molecules entering or leaving your lungs at this moment, some might well bear traces of Cleopatra's perfumes, German mustard gas, particles exhaled by dinosaurs or emitted by atomic bombs, even remnants of stardust from the universe's creation.

Tracing the origins and ingredients of our atmosphere, Kean reveals how the alchemy of air reshaped our continents, steered human progress, powered revolutions, and continues to influence everything we do. Along the way, we'll swim with radioactive pigs, witness the most important chemical reactions humans have discovered, and join the crowd at the Moulin Rouge for some of the crudest performance art of all time. Lively, witty, and filled with the astounding science of ordinary life, Caesar's Last Breath illuminates the science stories swirling around us every second.
Sam Kean is the New York Times bestselling author of Caesar's Last Breath, The Tale of the Dueling Neurosurgeons, The Disappearing Spoon, and The Violinist's Thumb, all of which were also named Amazon top science books of the year.

The Disappearing Spoon was a runner-up for the Royal Society of London's book of the year for 2010, and The Violinist's Thumb and The Tale of the Dueling Neurosurgeons were nominated for the PEN/E.O. Wilson Literary Science Writing Award in 2013 and 2015, as well as the AAAS/Subaru SB&F prize.

His work has appeared in the Best American Nature and Science Writing, the New Yorker, the Atlantic, the New York Times Magazine, Psychology Today, Slate, Mental Floss, and other publications, and he has been featured on NPR's "Radiolab," "All Things Considered," and "Fresh Air."
Praise for Caesar's Last Breath

"Sam Kean has done it again - this time clearly and entertainingly explaining the science of the air around us. He is a gifted storyteller with a knack for finding the magic hidden in the everyday."—Daniel H. Pink, author of Drive

"The most fun to be had from nonfiction is a good science book, with a writer of craft who can capture both the excitement and the elegance of science, the incredible fact that this is really how it works. Sam Kean is such a writer and Caesar's Last Breath is such a book. An enormous pleasure to read."—Mark Kurlansky, author of Paper and Salt

"Fascinating stories, so insightful, informative, and disarmingly written. It gave this astronaut a new respect for the air around us all, and made me delightfully more aware of each breath I take."—Col. Chris Hadfield, author of An Astronaut's Guide to Life on Earth

"A witty book that turns the science of the stuff we breathe into a delightful romp through history. Kean, an award-winning science writer... has done it again, using his free-wheeling style to translate hard scientific facts into lively stories."—Kirkus

"Riveting.... Kean has a knack for distilling chemistry to its essential elements, using stories and humor.... this is a dose of fresh air.—Library Journal

"Kean pumps chemical and historical trivia into this tale about air and the gases of which it is composed....Entertaining."—Publishers Weekly

"Richly informative.... Once again, Kean proves his mettle as one of science literature's most gifted practitioners."—Booklist

"In Caesar's Last Breath, [Kean] takes on the science of gases in his trademark effervescent, loopy style.... a lively, rewarding journey through the evolution of Earth's gaseous atmosphere."—Shelf Awareness

"[Caesar's Last Breath] brims with such fascinating tales of chemical history that it'll change the very way you think about breathing.... Kean crams the book full of wild yarns told with humorously dramatic flair.... The effect is oddly intimate, the way all good storytelling is -- you feel like you're sharing moments of geeky amusement with a particularly hip chemistry teacher."—Chelsea Leu, San Francisco Chronicle

"Compelling stuff, written with verve and in a style that veers between simple lightheartedness and open jocularity.... Eminently accessible and enjoyable."—Robin McKie, The Guardian

"A page-turner.... Kean clearly delights in weaving in the unexpected... compelling narrative of geologic history."—Science News

"Delightful.... Mixes science and history.... pointing out that something that as basic as air is much more complicated than you might realize."—Sarah Sloat, Inverse

"With fizzy... humor and an exuberant enthusiasm for scientific ephemera, [Kean] entices us to explore the alchemy of air and atmosphere."—BookPage

"Kean illuminates the science in everything from Earth's vaporous origins to the function of hydrogen in early aeronautic balloons and the ammonia and butane that Albert Einstein and Leo Szilard harnessed in the 1930s for a novel refrigerator."—Nature.com

"There is no denying the pleasure and indeed the wealth of scientific information to be obtained from reading Caesar's Last Breath."—Financial Times

Praise for The Tale of the Dueling Neurosurgeons:

One of Amazon's Best Books of the Year: Science

"This is Sam Kean's finest work yet, an entertaining and offbeat history of the brain populated with mad scientists, deranged criminals, geniuses, and wretched souls. The Tale of the Dueling Neurosurgeons is one of those books that will have you following your friends around, reading passages out loud, until they snatch the book away from you and read it for themselves. Good luck getting it back."—Amy Stewart, author of The Drunken Botanist

"Put your Netflix queue on hold. Sam Kean's The Tale of the Dueling Neurosurgeons will command your full attention from the first page. It's not just an engaging guide to mysteries of existence; it's compelling story-telling for anyone with a taste for the bizarre and metaphysical."—William Poundstone, author of Rock Breaks Scissors

"In tale after tale, best-selling author Kean provides a fascinating, and at times gloriously gory, look at how early efforts in neurosurgery were essentially a medical guessing game.... Entertaining and quotable, Kean's writing is sharp, and each individual story brings the history of neuroscience to life. Compulsively readable, wicked scientific fun."—Kirkus

Praise for The Violinist's Thumb:

"Kean's accessible genetic overview, written for the layman, is often as simple and elegant as a double helix."—Keith Staskiewicz, Entertainment Weekly

"Kean is one of America's smartest and most charming science writers, and his new book could be perfect for summer readers who prefer some substance with their fun."—Michael Schaub, National Public Radio

"Kean succeeds because his writing is funny, clever and altogether effervescent. His bestseller The Disappearing Spoon, about the periodic table, had the trick of finding the human-interest stories that open up the science. This one has the same knack."—The Times (UK)