Life on the Edge: The Coming of Age of Quantum Biology (Paperback) 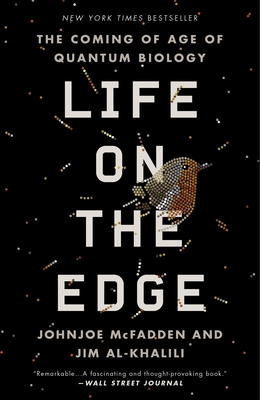 Life on the Edge: The Coming of Age of Quantum Biology (Paperback)


Usually Arrives to Store in 1-5 Days
New York Times bestseller • Life on the Edge alters our understanding of our world's fundamental dynamics through the use of quantum mechanics.

Life is the most extraordinary phenomenon in the known universe; but how did it come to be? Even in an age of cloning and artificial biology, the remarkable truth remains: nobody has ever made anything living entirely out of dead material. Life remains the only way to make life. Are we still missing a vital ingredient in its creation?

Using first-hand experience at the cutting edge of science, Jim Al-Khalili and Johnjoe Macfadden reveal that missing ingredient to be quantum mechanics. Drawing on recent ground-breaking experiments around the world, each chapter in Life on the Edge illustrates one of life's puzzles: How do migrating birds know where to go? How do we really smell the scent of a rose? How do our genes copy themselves with such precision? Life on the Edge accessibly reveals how quantum mechanics can answer these probing questions of the universe.

Guiding the reader through the rapidly unfolding discoveries of the last few years, Al-Khalili and McFadden describe the explosive new field of quantum biology and its potentially revolutionary applications, while offering insights into the biggest puzzle of all: what is life? As they brilliantly demonstrate in these groundbreaking pages, life exists on the quantum edge.

Winner, Stephen Hawking Medal for Science Communication
Johnjoe McFadden is Professor of Molecular Genetics at the University of Surrey and is the editor of several leading text books. For over a decade, he has specialized in examining tuberculosis and meningitis, inventing the first successful molecular test for the latter. He is the author of Quantum Evolution and co-editor of Human Nature: Fact and Fiction.

Jim Al-Khalili OBE is an academic, author, and broadcaster. He is a leading theoretical physicist based at the University of Surrey, where he teaches and carries out research in quantum mechanics. He has written a number of popular science books, including Pathfinders: The Golden Age of Arabic Science. He has presented several television and radio documentaries, including the BAFTA-nominated Chemistry: A Volatile History and The Secret Life of Chaos.
"Remarkable...Life on the Edge is a fascinating and thought-provoking book that combines solid science, reasonable extrapolation from the known into the unknown, and plausible speculation to give an accessible overview of a revolutionary transformation in our understanding of the living world." —Wall Street Journal

"The elemental provocation of the book lies in the authors' ability to make the complex conceivable... McFadden and Al-Khalili give sure footing to the anything-goes bafflement of quantum theory." —Kirkus Reviews

"McFadden and Al-Khalili draw readers into a revolutionary new paradigm. . . An intellectually exhilarating visit to the baffling frontiers of science!" —Booklist [starred]

"The book elegantly opens up a new way of looking at nature." —The Independent; “Books of the Year”

"A really original science book about a new field of research ... Groundbreaking." —Financial Times, “Books of the Year”

"Coherence is just one of the complex phenomena that Jim Al-Khalili and Johnjoe McFadden set out to teach the reader. They succeed by using delightfully revealing analogies and similes, some borrowed from their prior work, that make slippery concepts sit still for study." —The Economist

"Hugely ambitious ... the skill of the writing provides the uplift to keep us aloft as we fly through the strange and spectacular terra incognita of genuinely new science." —The Times (UK)

"This thrilling book is an overview of a field that barely exists ... Al-Khalili has a genius for illustrating complex ideas via imaginative sidetracks." —The Sunday Telegraph

“The great virtue of this book is its thesis – it sets out a clear and enthusiastic argument for the importance of quantum biology.” —New Scientist

"Life on the Edge gives the clearest account I've ever read of the possible ways in which the very small events of the quantum world can affect the world of middle-sized living creatures like us. With great vividness and clarity it shows how our world is tinged, even saturated, with the weirdness of the quantum." —Philip Pullman

"This illuminating account of an important new field is a wonderfully educative read." —A C Grayling