Letter to a Christian Nation (Paperback) 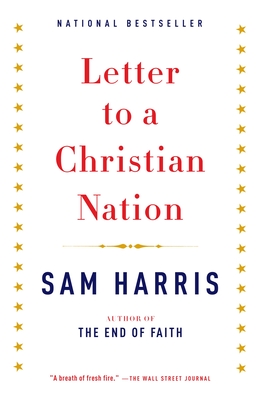 Letter to a Christian Nation (Paperback)

From the new afterword by the author:

Humanity has had a long fascination with blood sacrifice. In fact, it has been by no means uncommon for a child to be born into this world only to be patiently and lovingly reared by religious maniacs, who believe that the best way to keep the sun on its course or to ensure a rich harvest is to lead him by tender hand into a field or to a mountaintop and bury, butcher, or burn him alive as offering to an invisible God. The notion that Jesus Christ died for our sins and that his death constitutes a successful propitiation of a “loving” God is a direct and undisguised inheritance of the superstitious bloodletting that has plagued bewildered people throughout history. . .

Sam Harris is the author of the New York Times best seller, The End of Faith: Religion, Terror, and the Future of Reason, which won the 2005 PEN Award for Nonfiction. He is a graduate in philosophy from Stanford University and has studied both Eastern and Western religious traditions, along with a variety of contemplative disciplines, for twenty years. Mr. Harris is now completing a doctorate in neuroscience, studying the neural basis of belief, disbelief, and uncertainty with functional magnetic resonance imaging (fMRI). His work has been discussed in The New York Times, The Los Angeles Times, The San Francisco Chronicle, The Economist, and New Scientist, among many other journals, and he has made television appearances on The O'Reilly Factor, Scarborough Country, Faith Under Fire, and Book TV.
"A breath of fresh fire." —Wall Street Journal“I dare you to read this book...it will not leave you unchanged. Read it if it is the last thing you do.” —Richard Dawkins, author of The Selfish Gene and The God Delusion“It’s a shame that not everyone in this country will read Sam Harris’ marvelous little book Letter to a Christian Nation. They won’t but they should.” —Leonard Susskind, Felix Bloch Professor in theoretical physics, Stanford University