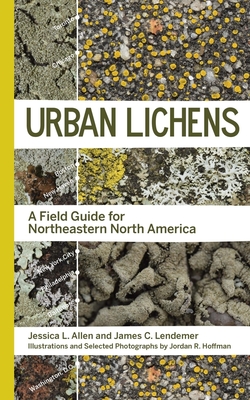 
On Our Shelves Now
A practical field guide to the common lichens found in the northeastern megalopolis, including New York City, Toronto, Boston/New Haven, Philadelphia, Baltimore/Washington, D.C., and as far west as Chicago

“A must-read for all who seek the wonders and diversity of nature in the city. Accessible, clear, and packed with invitations to curiosity.”—David George Haskell, author and winner of The John Burroughs Medal forThe Songs of Trees

Lichens are dynamic, symbiotic organisms formed by close cooperation between fungi and algae. There are over 20,000 identified species performing essential ecosystem services worldwide. Extremely sensitive to air pollution, they have returned to cities from which they were absent for decades until the air became cleaner.

This guide is the first to introduce urban naturalists to over 60 of the common lichens now found in cities and urban areas throughout northeastern North America--in parks and schoolyards, on streets, and in open spaces. Divided into three sections -- lichen basics, including their biology, chemistry, morphology, and role in human history; species accounts and descriptions; and an illustrated glossary, index, and references for further reading -- the book aims to connect city dwellers and visitors with the natural world around them. The descriptions, exquisite photographs, and line drawings will enable users to enter the hidden world of lichens.
Jessica L. Allen is an assistant professor of integrative plant biology at Eastern Washington University. James C. Lendemer is an associate curator at the New York Botanical Garden and assistant professor at the City University of New York.
“A must-read for all who seek the wonders and diversity of nature in the city. Accessible, clear, and packed with invitations to curiosity.”—David George Haskell, author and winner of The John Burroughs Medal for The Songs of Trees

“This book will be a boon for general naturalists in and around New York City, and will serve well as a sourcebook introducing natural history students to the total biological diversity of the urban parks and natural areas in the city.”—Irwin M. Brodo, co-author of Lichens of North America

“An invaluable resource. Easy to use and well-illustrated, this guide will substantially change the perception that lichens, like many other organisms, can only be fully admired in pristine environments. Anyone would be delighted to read it!”—Manuela Dal Forno, Botanical Research Institute of Texas

“This excellent guide—a first—will help everyone, especially those in New York City, recognize and understand the fascinating and diverse organisms that are urban lichens.”—Peter H. Raven, Missouri Botanical Garden

“It’s hard not to like a lichen. They are paragons of cooperation, agents of erosion, and bellwethers of ecosystem health. And it’s hard not to like this book by Jessica Allen and James Lendemer, which, with good grace and deep knowledge, introduces these exemplars hiding in plain sight. Take a moment to say hello. You’ll be glad you did.”—Eric W. Sanderson, author of Mannahatta: A Natural History of New York City