The Nation That Never Was: Reconstructing America's Story (Hardcover) 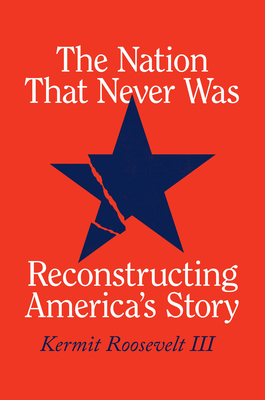 The Nation That Never Was: Reconstructing America's Story (Hardcover)

There’s a common story we tell about America: that our fundamental values as a country were stated in the Declaration of Independence, fought for in the Revolution, and made law in the Constitution. But, with the country increasingly divided, this story isn’t working for us anymore—what’s more, it’s not even true. As Kermit Roosevelt argues in this eye-opening reinterpretation of the American story, our fundamental values, particularly equality, are not part of the vision of the Founders. Instead, they were stated in Lincoln’s Gettysburg Address and were the hope of Reconstruction, when it was possible to envision the emergence of the nation committed to liberty and equality.

We face a dilemma these days. We want to be honest about our history and the racism and oppression that Americans have both inflicted and endured. But we want to be proud of our country, too. In The Nation That Never Was, Roosevelt shows how we can do both those things by realizing we’re not the country we thought we were. Reconstruction, Roosevelt argues, was not a fulfillment of the ideals of the Founding but rather a repudiation: we modern Americans are not the heirs of the Founders but of the people who overthrew and destroyed that political order. This alternate understanding of American identity opens the door to a new understanding of ourselves and our story, and ultimately to a better America.

America today is not the Founders’ America, but it can be Lincoln’s America. Roosevelt offers a powerful and inspirational rethinking of our country’s history and uncovers a shared past that we can be proud to claim and use as a foundation to work toward a country that fully embodies equality for all.

Kermit Roosevelt III is a professor of constitutional law at the University of Pennsylvania Law School. A former law clerk to Supreme Court Justice David Souter, he is the author of The Myth of Judicial Activism, as well as two novels, Allegiance and In the Shadow of the Law.

“Kermit Roosevelt III illuminates tumultuous today by examining the contentious beginning. With The Nation That Never Was: Reconstructing America’s Story, he thoughtfully explains our growing confusion as to what the creation meant and means.”
— Guardian

“Astute textual analysis, careful historical research, and a deep commitment to social justice make this an inspiring reexamination of America’s past.”
— Publishers Weekly

“Roosevelt proposes that we  . . .  attempt a national enterprise to atone for our original sin through targeted investment in Black and other marginalized communities, which ‘offers the possibility of a real transformation.’ . . . [The book is] a novel way of reading our founding documents and revising them as both law- and nation-building myths.”

"Roosevelt argues that the conventional story of the United States, which credits the Founders for inaugurating the American project, is false. Equality, he contends, had no place in their vision. Rather, it was Reconstruction, which followed the Civil War and pursued the ideals of liberty and equality, that forged the nation Americans today inherit."
— Yale Law Report

"Roosevelt. . . challenges the prevailing narrative of the founding of the American regime."
— Choice

“In The Nation That Never Was, Roosevelt argues that the Fourteenth Amendment is at the heart of our contemporary constitutional identity, and he is right to stress the revolutionary nature of the Amendment and its divergence—not convergence—from the political theory of the Declaration. He understands that the history we need to know to move forward as a country is that of secession, Reconstruction, and the post-Reconstruction era.”

“Roosevelt has written a truly extraordinary book. Instead of a sometimes fatuous ‘audacity of hope,’ he offers something much tougher to read and to come to terms with: the audacity of a fearless confrontation with the American past (and its possible future). He persuasively argues that we must liberate ourselves from our sentimentalized attachment to ‘the Founders’ and even to the Declaration of Independence, which he audaciously reinterprets. We should instead define our national identity around the promises (and challenges) of Reconstruction and the aspiration, yet unachieved, for a genuine regime change to replace the ‘Slaveholders’ republic’  founded on white supremacy that was the aftermath of secession from the British Empire and the drafting of the 1787 Constitution.  This book will undoubtedly be controversial. It deserves intense discussion, for if Roosevelt is right, nothing less than the future of the United States is at stake.”
— Sanford Levinson, author of Our Undemocratic Constitution

"In this brilliant book, Roosevelt asks us to trade in our standard story of America, based on founding myths about the Declaration of Independence, for a different, more complicated, and yet more hopeful story of Reconstruction. Like the Reconstruction framers, we too can build on the wreckage of the past to achieve justice not only for ourselves but for everyone, and help create the America that is to come."


— Jack M. Balkin, author of The Cycles of Constitutional Time