A Short Account of the Destruction of the Indies (Paperback) 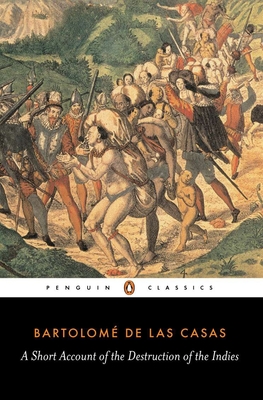 A Short Account of the Destruction of the Indies (Paperback)

Painful accounts of the early Spanish settlers’ mistreatment of Native Americans in the New World. Bartolomé de las Casas saw these horrors firsthand, and this book detailed all of it and called for major reforms, which came as a result of his speaking up.

— From Shawn's Staff Picks
Bartolomé de Las Casas was the first and fiercest critic of Spanish colonialism in the New World. An early traveller to the Americas who sailed on one of Columbus's voyages, Las Casas was so horrified by the wholesale massacre he witnessed that he dedicated his life to protecting the Indian community. He wrote A Short Account of the Destruction of the Indies in 1542, a shocking catalogue of mass slaughter, torture and slavery, which showed that the evangelizing vision of Columbus had descended under later conquistadors into genocide. Dedicated to Philip II to alert the Castilian Crown to these atrocities and demand that the Indians be entitled to the basic rights of humankind, this passionate work of documentary vividness outraged Europe and contributed to the idea of the Spanish 'Black Legend' that would last for centuries.

For more than seventy years, Penguin has been the leading publisher of classic literature in the English-speaking world. With more than 1,700 titles, Penguin Classics represents a global bookshelf of the best works throughout history and across genres and disciplines. Readers trust the series to provide authoritative texts enhanced by introductions and notes by distinguished scholars and contemporary authors, as well as up-to-date translations by award-winning translators.
Bartolome de las Casas was born in Seville around 1484. At the age of eighteen he left for the New World, where he participated in the conquest of Cuba and witnessed the first full-scale massacre of an Indian community. He became a priest and entered the Dominican order. He dedicated himself to the protection and defence of the Indians.

Anthony Pagden teaches in the Department of History at John Hopkins University, Baltimore. He is the author of The Fall of Natural Man and Spanish Imperialism and the Political Imagination.

Nigel Griffin read modern languages at Oxford and was a Fellow of New College in the 1970s. He now concentrates on writing and translating and has worked for both the UN and the World Bank.