A Sacred Oath: Memoirs of a Secretary of Defense During Extraordinary Times (Hardcover) 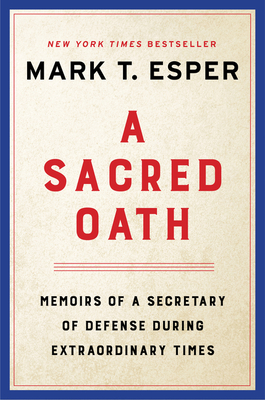 A Sacred Oath: Memoirs of a Secretary of Defense During Extraordinary Times (Hardcover)

Former Secretary of Defense Mark T. Esper reveals the shocking details of his tumultuous tenure while serving in the Trump administration.

From June of 2019 until his firing by President Trump after the November 2020 election, Secretary Mark T. Esper led the Department of Defense through an unprecedented time in history—a period marked by growing threats and conflict abroad, a global pandemic unseen in a century, the greatest domestic unrest in two generations, and a White House seemingly bent on breaking accepted norms and conventions for political advantage. A Sacred Oath is Secretary Esper’s unvarnished and candid memoir of those extraordinary and dangerous times, and includes events and moments never before told.

Mark T. Esper served as secretary of defense from 2019 to 2020 and as secretary of the Army from 2017 to 2019. A distinguished graduate of West Point, he spent twenty-one years in uniform, including a combat tour in the 1991 Gulf War. Esper earned a Ph.D. from George Washington University while working on Capitol Hill and at the Pentagon as a political appointee. He was also a senior executive at a prestigious think tank, at various business associations and commission, and at a Fortune 100 technology company. Esper is the recipient of multiple civilian and military awards, and currently sits on several public policy and business boards.

“Mr. Esper details the all-consuming task of managing America’s largest and most vital cabinet department—instructive reading for those unfamiliar with what operationalizing national security policy decisions involves. Time and again, he shows how presidential inattention, ignorance, incuriosity, duplicity and unwillingness to take responsibility for hard decisions all put the United States at risk…. A Sacred Oath is not a gratuitous tell-all. It is a work of history. Mr. Esper has his perspectives, to which he is entitled, but his willingness to go on the record at length is invaluable. Look forward to the reaction from Mar-a-Lago.” — Wall Street Journal

“A damning portrait of a chaotic, inept administration that posed countless dangers to the nation and the world.” — Kirkus Reviews