The FBI Way: Inside the Bureau's Code of Excellence (Paperback) 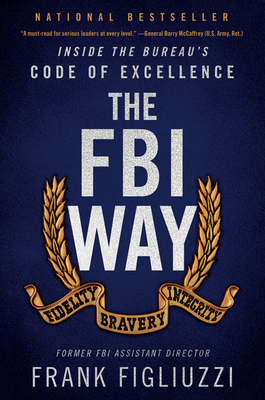 The FBI Way: Inside the Bureau's Code of Excellence (Paperback)

"A must read for serious leaders at every level." —General Barry R. McCaffrey (Ret.)

Frank Figliuzzi was the "Keeper of the Code," appointed the FBI’s Chief Inspector by then-Director Robert Mueller. Charged with overseeing sensitive internal inquiries and performance audits, he ensured each employee met the Bureau's exacting standards. Now, drawing on his distinguished career, Figliuzzi reveals how the Bureau achieves its extraordinary track record of excellence—from the training of new recruits in "The FBI Way" to the Bureau's rigorous maintenance of its standards up and down the organization.

All good codes of conduct have one common trait: they reflect the core values of an organization. Individuals, companies, schools, teams, or any group seeking to codify their rules to live by must first establish core values. Figliuzzi has condensed the Bureau’s process of preserving and protecting its values into what he calls “The Seven C’s”. If you can adapt the concepts of Code, Conservancy, Clarity, Consequences, Compassion, Credibility, and Consistency, you can instill and preserve your values against all threats, internal and external. This is how the FBI does it.

Figliuzzi’s role in the FBI gave him a unique opportunity to study patterns of conduct among high-achieving, ethical individuals and draw conclusions about why, when and how good people sometimes do bad things. Unafraid to identify FBI execs who erred, he cites them as the exceptions that prove the rule. Part pulse-pounding memoir, part practical playbook for excellence, The FBI Way shows readers how to apply the lessons he’s learned to their own lives: in business, management, and personal development.

Frank Figliuzzi served as a special agent with the FBI for twenty-five years, rising to become assistant director, charged with leading the Bureau’s famed Counterintelligence Division. Figliuzzi held senior FBI leadership positions in major American cities, and was appointed the FBI’s chief inspector to oversee sensitive internal inquiries. He is a graduate of Fairfield University and UConn School of Law, and he holds certificates from Harvard’s John F. Kennedy School of Government and Northwestern’s Kellogg School of Management. Today he is a national security analyst for NBC News, and he is a sought-after speaker and instructor on leadership and risk management.

"Far-reaching, arguing that the world can benefit not from particular FBI skills but from the organization’s principles of accuracy and accountability." — Devlin Barrett, Washington Post

“The FBI Way is a sterling achievement in narrative nonfiction, thrilling without being a thriller, and one of those books people will be referencing for decades to come as a definitive tome for the times in which we live." — Providence Journal

“Figliuzzi’s war stories of hunting terrorists are spellbinding, but equally important is his playbook for how the FBI’s methods for achieving excellence in performance can be duplicated by a wide variety of organizations. This should be required reading in business schools across America.” — Andrea Mitchell, Chief Foreign Affairs Correspondent, NBC News

"Frank Figliuzzi is a patriot. He is an intelligent, straight-forward, and passionate voice for reason, loyalty, and what I have discovered are the simple but essential FBI values. In The FBI Way, through dramatic front-line stories and commentary, he demonstrates how to bring those values into our own lives." — Robert De Niro, Recipient of the Medal of Freedom

"This is a must read for serious leaders at every level. Frank Figliuzzi served 25 years in the famed FBI rising to the highest levels of leadership. His assignments as chief counter-espionage officer for the Bureau, his street experience as a Special Agent confronting crime, corruption and police misconduct, and his perspective as an FBI policy maker offer us fresh insights into the links between preserving values, pursuing excellence, and defending anything worth keeping."  — General Barry R. McCaffrey (U.S. Army Retired)

“The institutions that best preserve and defend our nation’s values are made up of men and women who live and die by a code of excellence.  ...  As Frank Figliuzzi's The FBI Way makes clear, their survival and success are dependent on the same values that will determine the survival and success of our democracy.  It’s time we all ask whether we are willing to live by that code.” — Leon E. Panetta, Former Secretary of Defense and Director of the CIA

"For Frank Figliuzzi it's personal; for the rest of us, The FBI Way offers unique insights into how the men and women of the FBI serve with distinction and honor by adhering to a code that allows them to defend what matters most - our democracy."  — Michael Steele, Former Chairperson of the Republican National Committee

“An achievement in narrative nonfiction, a thrilling non-thriller.” — Richmond Times-Dispatch