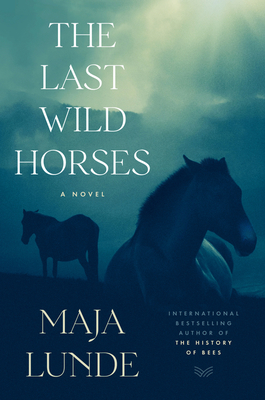 Translated into 40 languages, winner of the Norwegian Bookseller’s Prize, and the most successful Norwegian author of her generation, Maja Lunde returns with a heart-wrenching tale, set in the distant past and the dystopian future, about extinction and survival, family and hope.

Mikhail lives in Russia in 1881. When a skeleton of a rare wild horse is brought to him, the zoologist plans an expedition to Mongolia to find the fabled Przewalski horse, a journey that tests not only his physicality, but his heart.In 1992, Karin, alongside her troubled son Mathias and several Przewalski horses, travels to Mongolia to re-introduce the magnificent horses to their native land. The veterinarian has dedicated her life to saving the breed from extinction, prioritizing the wild horses, even over her own son.

Europe’s future is uncertain in 2064, but Eva is willing to sacrifice nearly everything to hold onto her family’s farm. Her teenage daughter implores Eva to leave the farm and Norway, but a pregnant wild mare Eva is tending is about to foal. Then, a young woman named Louise unexpectedly arrives on the farm, with mysterious intentions that will either bring them all together, or devastate them one by one.

Spanning continents and centuries, The Last Wild Horses is a powerful tale of survival and connection—of humans, animals, and the indestructible bonds that unite us all.

Translated from the Norwegian by Diane Oatley

Maja Lunde is a Norwegian author and screenwriter. Lunde has written five books for children and young adults. She has also written scripts for Norwegian television, including for the children’s series Barnas supershow (“The Children’s Super Show”), the drama series Hjem(“Home”) and the comedy series Side om Side (“Side by Side”). THE HISTORY OF BEES was her first novel for adults. She lives with her husband and three children in Oslo.

“Lunde captures the depth and range of human love in all forms—our capacity to care for species other than our own, our desire to connect with others, and how both these are so often thwarted by the external circumstances of trauma and war. Filled with haunting notions of interspecies kinship, the reverberations of kindness and care, and the innate drive to love and survive despite the odds, this book is one to savor.” — Scientific American

“Each narrative suggests the unintended and often disastrous consequences of human interventions in nature. Seamlessly flowing between historical, travel, and dystopian fiction, this is another riveting, thrilling, and powerful installment from internationally renowned Lunde.” — Booklist